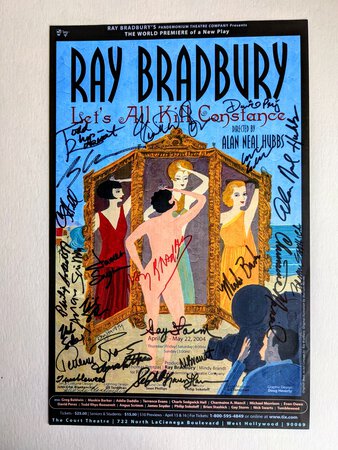 POSTER for the world premier of LET'S ALL KILL CONSTANCE, by RAY BRADBURY. A production of Bradbury's PANDEMONIUM THEATRE COMPANY. The premier was performed at the Court Theatre, West Hollywood, April 17, 2004.

HAND SIGNED by Ray Bradbury in red (blood red, of course), and by many members of the cast and crew in black.

NEAR FINE condition, a hint of handling, sharp, bright, clean and clear; lovely, would look great mounted and/or framed.

btw: If you haven't seen RACHEL BLOOM'S video song tribute to RAY BRADBURY, you really should. Bradbury was shown the video not long before he died in 2012, and reportedly he chuckled and had a twinkle in his eye.