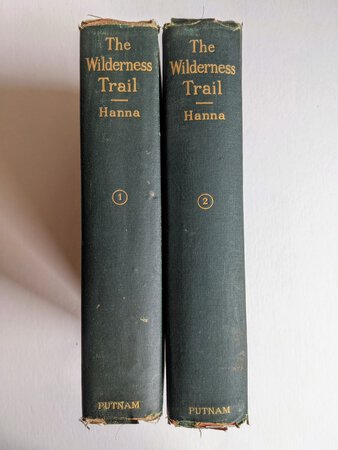 THE WILDERNESS TRAIL; Or the VENTURES and ADVENTURES of the PENNSYLVANIA TRADERS on the ALLEGHENY PATH with Some New Annals of the Old West, and the Records of Some STRONG MEN and Some BAD ONES. By Charles A. Hanna.

PRESENTATION INSCRIPTION by the AUTHOR on the front free endpaper of Volume I to WALTER EDWIN FREW, whose bookplate is on the facing front pastedown. The inscription is in the Author's hand and is dated, but not signed:

"Presented to Mr. W. E. Frew / by the Author / January 13th 1912." Walter Edwin Frew was President of the Corn Exchange Bank of New York, which over the years transformed into what is now Chemical Bank. At the time, Frew was one of the youngest Presidents of a major U.S. bank. It is interesting to note that Charles A. Hanna was of Scotch-Irish descent and W. E. Frew was of Scotch descent; and also that Hanna wrote a genealogy of the Scotch-Irish of the Ohio Valley.

Published by G.P. Putnam's Sons, New York, 1911. First edition. LIMITED to only 1000 COPIES. No additional copies were ever printed from the original type because, as stated on the limitation page: "Of the work one thousand copies have been printed from type, and THE TYPE DESTROYED."

An important, illustrated study of many Native-American tribes and indigenous cultures, including the Iroquois, Shawnees, Mingoes, Wendats, and Petticoats, as visited, seen and traded with by white traders, including George Croghan, along the Allegheny Path in the Ohio Valley and elsewhere along various wilderness trails.

Condition: The covers are worn through at the spine ends and corner tips, have some edge wear, and have some scratches and rubs, but are still sturdy, doing their job well, and have bright spine gilt. Internally, the text pages are lightly toned with just a smattering of light foxing here and there, some front page edges remain uncut, there is a crease to the upper corner of the pages of Volume I, otherwise the pages of both volumes are just lightly used and still tight, bright, clean, clear and unmarked.. The MAPS and PLATES are all great, the plates are bright, clean and clear; the maps feel like they have only been opened once or twice at most, really nice.

An Original 1911 Two Volume Set that is RARE & UNIQUE with the AUTHOR'S INSCRIPTION to fellow Scottsman Walter Frew.

INTERNATIONAL BIDDERS PLEASE NOTE: This two volume set is heavy and will require substantial additional shipping charges. After placing your order you will be notified of the charges and be able to accept or reject them before payment is taken. Thanks!