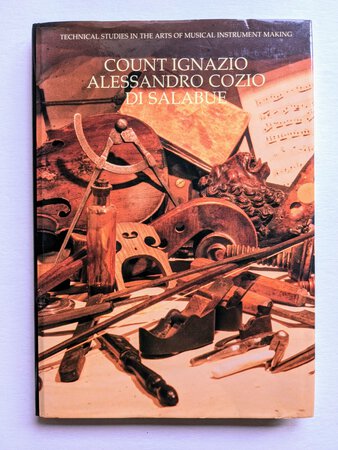 Compiled, Translated, Edited and Annotated by Andrew Dipper and David Woodrow from Salabue's original books and manuscripts. Produced as part of the series: Technical Studies in the Arts of Musical Instrument Making

FIRST and LIMITED EDITION of only 995 copies, this being hand numbered copy 890.

Condition: VERY GOOD book, lightly used with a couple small indentations on the covers, in a VERY GOOD dustjacket that has light creases from handling and use, still bright and clean. A solid, very presentable copy.

******Count Ignazio Alessandro Cozio di Salabue, b.1755 d.1840, was an Italian Count known as the first great connoisseur and collector of violins. Among the most important instruments in Cozio's collection were ten violins of Antonio Stradivari, which he acquired from the maker's son Paolo in 1773-1774; however, many more instruments by Stradivari and numerous other renowned violin makers were in his collection or passed through his hands over the years. Cozio's meticulous notes on nearly every instrument that passed through his hands contributed enormously to the body of knowledge surrounding Italian violin making.******