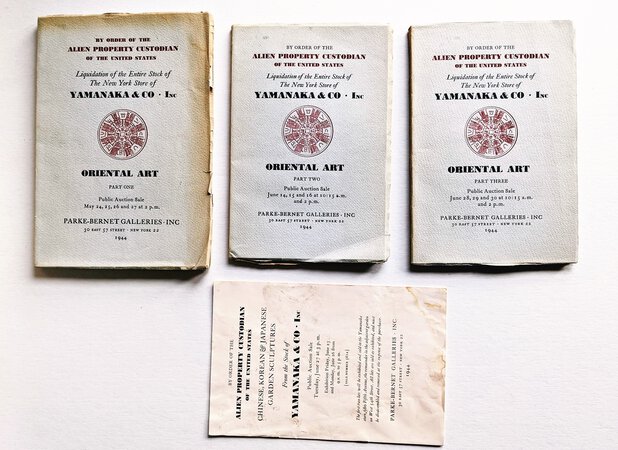 COMPLETE SET OF AUCTION CATALOGS for the SEIZED PROPERTY LIQUIDATION SALE of YAMANAKA & CO. Its inventory was seized by the U.S. Government in 1944 as part of the WWII Japanese hysteria, and was liquidated in several auctions.

Each catalog has the heading: "BY ORDER OF THE ALIEN PROPERTY CUSTODIAN OF THE UNITED STATES - LIQUIDATION OF THE ENTIRE STOCK OF THE NEW YORK STORE OF YAMANAKA & CO. INC."

Prior to the seizure of its property, YAMANAKA & CO. was one of the MOST IMPORTANT ASIAN ART DEALERS in the UNITED STATES, acknowledged to have been a MAJOR SUPPLIER TO THE METROPOLITAN MUSEUM for its Asian art collection.

THREE AUCTION CATALOGS plus a SUPPLEMENT. The auctions took place at the PARKE-BERNET GALLERIES, New York, in May and June, 1944.

Each of the three catalogs has an unused absentee bid sheet laid in at the rear.

On the last page of one of the catalogs and the supplement is a full page ad stating: "FOR VICTORY BUY UNITED STATES WAR BONDS". I guess they forgot to add: "and seize and liquidate all property owned by Japanese-Americans."

CONDITION: Catalog Part One is in GOOD condition, the covers are toned at the margins and spine, worn at the yap edges and spine ends, and have some corner creases; internally there is a crease to the bottom and top corner of the early pages, otherwise the pages are just lightly used and still bright, clean, clear and unmarked. Catalogs Part Two and Part Three are in VERY GOOD condition, their covers are worn along the yap edges, are toned at the spine and edges, and have some corner creases, spine end wear and light signs of handling, but are still solid, bright and clean; internally the pages of Part Two and Part Three are just lightly used, still tight, bright, clean, clear and unmarked.

A solid and very presentable set of the catalogs of this three part auction.

The SUPPLEMENT catalog is only in FAIR condition, it has significant soiling, creasing, some shorelining, and what looks like a footprint on its back cover and maybe the front cover too (maybe stomped on by Uncle Sam), but is nonetheless complete and present. It is almost never found as part of the Yamanaka & Co. set of catalogs.

These catalogs are not only a record of Asian antiques that were bought and sold in New York and in museums throughout America pre 1945, they are also an important historic document of the looting of Japanese-American businesses in the name of Liberty during World War II.

About YAMANAKA & CO. and It's Founder (from Wikipedia):

******Yamanaka Sadajiro, b.1866 d.1936, arrived in the United States in 1894, opening a small antique shop in Chelsea, New York City. He subsequently founded Yamanaka & Company, which in 1917 took over a five story building on Fifth Avenue in Manhattan.

After Yamanaka's death, Yamanaka & Company continued to operate under the direction of his heirs, but saw its inventory confiscated and auctioned by the U.S. Government Office of Alien Property Custodian in a series of auctions in 1944.******