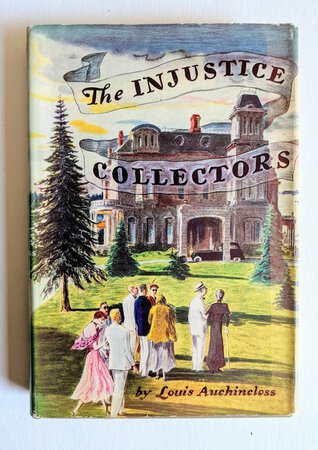 THE INJUSTICE COLLECTORS, by LOUIS AUCHICLOSS. His second book, but the first under his own name (his first book, Indifferent Children, was published under the name Andrew Lee).

Published by Houghton Mifflin Company, Boston, 1950. First edition, with the date 1950 on the title page and copyright page, with no indication of additional printings.

SIGNED by LOUIS AUCHINCLOSS on an armorial ownership bookplate of ROLLAND COMSTOCK, a renowned book collector who was MURDERED BY HIS WIFE for HAVING TOO MANY BOOKS. The attractive bookplate is on the front pastedown. You can read all the details of this intriguing biblio murder mystery on the Internet, search "Rolland Comstock murder".

Condition: NEAR FINE book, there is a scrape to the bottom edge of the front cover, light toning to the pages as normal, otherwise the covers and inner pages are sharp, tight, bright, clean, clear and unmarked. In a VERY GOOD dustjacket that has some wear at the spine ends and corner tips, some sunning to the spine, and light soiling to the rear panel. A solid, attractive, very presentable copy.

An early Auchincloss novel, hard-to-find in its dustjacket, made Bloody Interesting being SIGNED on the bookplate of the MURDERED ROLLAND COMSTOCK, BOOK COLLECTOR.

Below you can read about the NOTED BOOK COLLECTOR ROLLAND L. COMSTOCK, his book collection, and his murder. A true bibliophile mystery. Enjoy.

Most people would be hard pressed to fill a library in their home. Not book collector Rolland Comstock. He needs two. Once the walnut shelves of his old library were near bursting Comstock began thinking that maybe he and his wife, Alberta, should add yet another library into their already imposing home on a hill.

The library is a sight to behold. Book laden shelves cover the walls from floor to ceiling. "In my library there are around 50,000 items, of which 90 percent are books. A majority are signed first editions of the author's work."

If you ask him if he's got anymore room for books, he'll look around and answer in a hushed voice:

"I wouldn't want to say without checking to see if this room is bugged," Comstock says. "If my wife would hear me say that we're running very short on room, I think she'd murder me tonight!"

Inside, the slain attorney's famed book collection appeared to be untouched. Comstock was nationally known for a home library that contained over 50,000 items, primarily modern first editions. He was reportedly looking to build an additional wing, or even another home, for his ever expanding collection.

The recent death of Comstock's ex wife, Alberta Comstock, brought up the question of whether the investigation of the 2007 homicide of Rolland would be officially closed. She was the main suspect in the murder investigation.