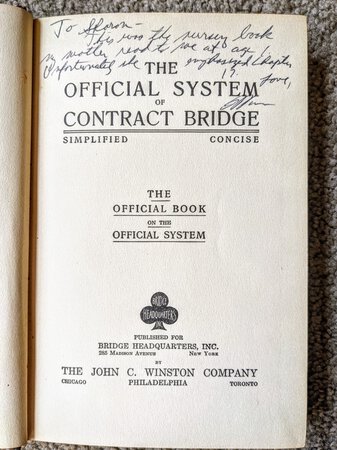 SIGNED and LOVINGLY INSCRIBED by the great Bridge Player and even greater Investor WARREN BUFFETT to his long-time BRIDGE PARTNER and FRIEND SHARON OSBERG.

"To Sharon - / This was the nursery book my mother read to me at age 1. / Unfortunately she emphasized Chapter 17 / Love, / Warren".

Chapter 17 discusses the subject of overbidding, how it can be either a disastrous move or a smart tactic. Hmm. I think Warren applied the smart tactic part of the lesson in his business dealings!

Not just signed and inscribed, but affectionately so.

Sharon Osberg is not only a bridge partner to Warren Buffett but to Bill Gates as well.

The Book: Hardcovers, faux suede leather covered boards, gilt lettering and designs on the front cover and spine (though mostly faded away on the spine), 5x7.5 inches, [2], vi, 236 pages.

In addition to the Contract Bridge book, the lot includes 15 booklets on Bridge from the collection of Sharon Osberg. Each of the booklets has a mailing label addressed to Sharon Osberg (or Sharon Smith, her earlier married name) on the back or front cover.

GOOD Condition: The Contract Bridge book is darkened at the spine, rubbed at the boards, and has inner pages that are lightly toned, but it is a solid, complete, nice copy. Warren Buffett's inscription on the title page is bright and clear.

The Osberg collection of 15 Bridge booklets are in generally GOOD condition, a couple of the covers are splitting at the spine, and a few have some creases, but overall they are solid and clean, and together they provide great provenance for the book.

Want to really know how Warren Buffett learned to invest? He learned to play Bridge, taught to him by Sharon Osberg.

FOR IMAGES of Osberg together with Buffett and Gates, Google "Warren Buffett" "Sharon Osberg" or "Bill Gates" "Sharon Osberg", and you will find images of her with one, or the other, or both.

FOR IMAGES of Osberg together with Buffett and Gates, Google: "Warren Buffett" "Sharon Osberg" or Google: "Bill Gates" "Sharon Osberg", and you will find images of her with one, or the other, or both.

There is a great interview with Sharon Osberg that delves into her close relationship with Warren Buffett and Bill Gates. Google: "Sharon Osberg" "Warren Buffett" "SFGate" or Google: "THE BRIDGE CLUB / WHAT DO SHARON OSBERG, WARREN BUFFETT and BILL GATES SHARE? A LOVE OF BRIDGE".

And I leave you with this tidbit:

When Sequoia [a large Venture Capital firm] was seeking new independent directors 12 years ago, Mr. Buffett recommended Ms. Osberg. In a 2006 interview with The San Francisco Chronicle, she described Mr. Buffett as her best friend, and she has often spent Thanksgiving with him in Omaha. A former Wells Fargo executive, Ms. Osberg is perhaps best known as a world-class bridge player. She has won two world championships, and she and Mr. Buffett play bridge electronically four times a week. - NY Times 2015.