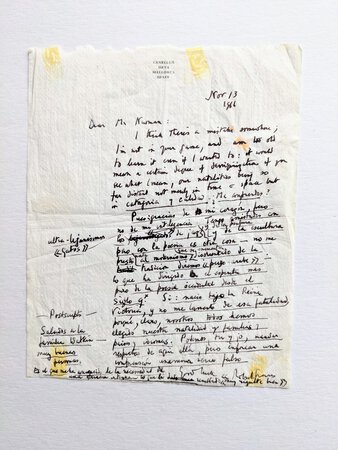 HANDWRITTEN, SIGNED LETTER by ROBERT GRAVES. The letter is half in English and half in Spanish. It is written from his home in Deyá, Mallorca, Spain, and dated November 13, 1966.

Though not clearly stated, Graves' letter reads like Mr. Newman had asked him to write a review for one of his works and Robert Graves was replying with a firm, though again unstated, NO. In the letter, Graves writes about his dislike of modernist poetry (and therefore modernist poets), states that he and Newman are different in many ways, including location, culture, and feelings about poetry, and he makes it clear that they do not share a unified understanding (i.e. poetic understanding) and that he does not want a close relationship. Though I do not know who Mr. Newman is, my guess would be that he a fellow poet, writer, or colleague, maybe from Oxford where Graves taught from 1961-1966 before returning to Spain as an expat.

It is a wonderfully written letter, abstract - almost poetic - in its use of language, yet precise in its intent.

"Dear Mr. Newman: I think there is a mistake somewhere; I'm not in your game, and am too old to learn it even if I wanted to: it would mean a certain degree of denigration if you see what I mean, our nationalities being so far distant not merely in time and space but in..."

The remainder of the letter is in Spanish, as follows (Graves' handwriting, is not easy to transcribe, so please forgive any errors):

(There is also a sentence in Spanish at the very bottom of the letter which is undecipherable.)

Below is an English rendition of the Spanish section of the letter, with thanks to my son-in-law and daughter. It is meant to convey the meaning of Graves' letter and is not an exact word-for-word translation, so please forgive any wrong assumptions. Graves has his own way of saying what he wants to say - and in Spanish it's especially difficult to know what that is. The provided images of the letter will allow you who are able to decide what you think he is trying to convey.

"...category and quality, do you understand me? Thanks anyway. My heart says one thing but my mind another. I have friends that are far out-of-the-mainstream "cats" of jazz and painting and sculpture but with poetry it is something else - I do not like the modernism that I find is oriented away from tradition, what we might call "pure-Arabic" - that which has directed the purest spirit of western poetry since the 9th century. Yes: I was born under Queen Victoria, and I do not regret that fatalism, because, of course, you and I decided to choose our place in this world, our nativity and families and countries and languages. We can, you and I, send our respects from here to there, but to focus on a united understanding would be false.