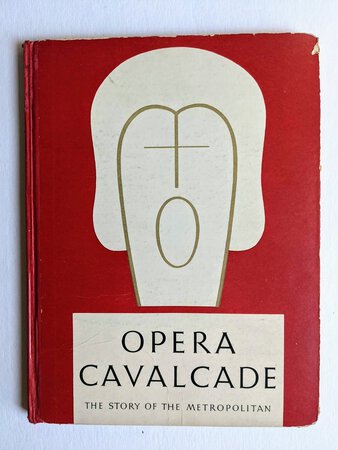 Doubling as an AUTOGRAPH ALBUM, the book contains SIGNATURES of 55 OPERA SINGERS collected by a fan over the OPERATIC SEASONS 1943-1948. The signatures are on opera program covers, cut pages, and clipped sheets, that have been glued on (most at the corners) to the pages and inside covers of the book. The signatures are in ink and pencil.

On the title page the previous owner lists some of the operas he/she attended, and the dates they were performed.

On page 63 there is a list of all the members of the "current" Metropolitan Opera Company (i.e. 1938 when this book was published). There are check marks by twenty-one of the names. Those names make up part of the 55 signatures collected in this album/book.

Condition: The book is in GOOD MINUS condition, worn through at the edges and corners, with rubs, scrapes and scratches to the boards; but is solid and has a cover image that is bright and attractive. The inner pages have some age toning and foxing, and two pages have offsetting likely from a newspaper page laid in at some point; otherwise the inner pages are tight, bright, clean and clear. The signatures are mostly sharp and clear though some of the pencil signatures are fading, but even those are easily legible with only one that has faded into near illegibility, at least according to my aging eyes.

A wonderful look at the world of Opera as it was in the mid 1940s, filled with signatures of those who were part of that world.

A unique treasure for the lover of opera in your life or soul.