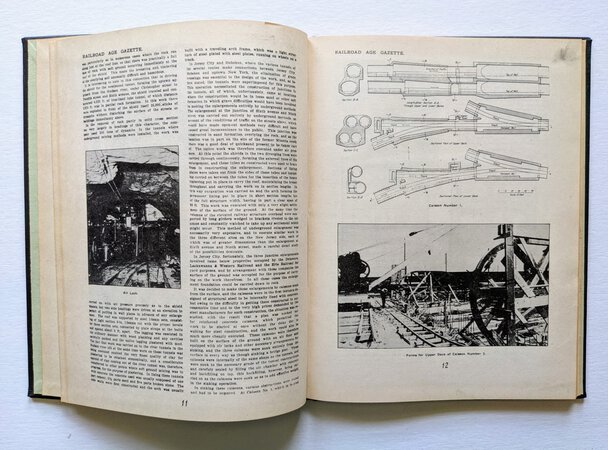 PAGES FROM THE PAST / THE STORY OF THE HUDSON RIVER TUNNELS.

A PRIVATELY PRODUCED HISTORY of the HUDSON RIVER TUNNELS.

"COMPILED FOR W. V. McMENIMEM". McMenimen was one of the notable engineers who supervised the building of the tunnels. Published by his associates - fellow "tunnel men" - at Raymond Concrete Pile Company, likely as a 1944 Christmas keepsake book.

SIGNED by WILLIAM V. McMENIMEN on the title page, a presentation copy for the engineer John Q. Barlow.

The book contains material gathered from 'The Railroad Age', 1909; 'Scientific American', 1904 to 1909; excerpts from the book 'Crowded Years' by McAdoo', 1931; a paper written by James Forgie in 1912 for the Aberdeen, Scotland, Society of Engineers; and a Graduate Thesis on the Construction of the Hudson Tunnel written by John Barlow, 1882. ALL the compiled articles, papers, and thesis, deal with the CONSTRUCTION OF THE HUDSON RIVER TUNNEL.

Laid in is a 1945 TLS from the Raymond Concrete Pile Company to John Q. Barlow forwarding a copy of the book to him, and thanking him for providing a brief (new) foreword to his 63 year old thesis for the book. John Q. Barlow was Chief Engineer at The Utah Construction Company, located in San Francisco. The letter begins: "I have been away for many months and I cannot find that a copy of the book which we compiled for Mr. William V. McMenimen on the Hudson-Manhattan Tunnels has ever been sent to you. Mr. McMenimen has autographed a copy...for you. You will note that a most interesting section of this book is your old thesis..."

CONDITION: NEAR FINE book, the pages are lightly browned / age toned and there is a slight bow to the boards. The tls is in Good condition, worn and browned where it overhangs the text block, otherwise bright and clear.

About W. V. McMENIMEN, from the Foreword:

"In 1904 a young man, Bill McMenimen, just out of MIT came to New York and secured a position as a rodman with Jacobs and Davies, who were then constructing the first Hudson River tunnel. Within a year he was promoted to superintendent of the North River tunnel at Morton Street at the age of twenty three. Within two years he was made general superintendent. After completion of the tunnel job he organized the Dock Contracting Co. This Company was successful in building subway sections in New York City and Brooklyn; a Power House and Dam in Rochester, New York; and a diversion tunnel in Kansas City, Kansas. In 1918 he joined Raymond Concrete Pile Company as VP in charge of Construction. Today he is Vice President and General Manager. Under McMenimen's supervision they have done heavy construction in various parts of the world. Today "Mac" is recognized as one of the foremost leaders in the construction field. Many of his old tunnel men have remained with him and for years it has been the custom to get together at Christmas to wish him good cheer. The thought this year (1944) is to delve into the past and renew memories of tunnel days. It is hoped that MAC will enjoy reading it."

SCARCE. None online; none in WorldCat. Privately published, likely in a small quantity.