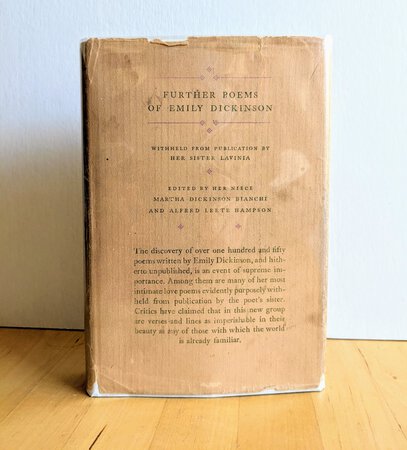 Published by Little, Brown and Co., Boston, 1929. First Edition, First Printing with the date 1929 on the title and copyright page, the statement "Published March, 1929" on the copyright page, and no indication of additional printings.

SIGNED and INSCRIBED by MARTHA DICKINSON BIANCHI, Emily Dickinson's niece who inherited and managed many of her Aunt's manuscripts. She was the last surviving member of the Dickinson family line.

Also, laid-in is a 2 page handwritten letter by Martha Dickinson Bianchi. It is written on her personal stationery which is blind embossed: "The Evergreens / Amherst", the house where she lived, which is next door to "The Homestead", the house where Emily Dickinson was born and lived.

Bearing in mind that Martha Dickinson Bianchi's handwriting is very difficult to read / decipher, here is what (I think) the letter says: "Dear Mr. (?) // So many congratulations! I am delighted for you, and everyone said all along the prize must be yours - so I was not surprised. // Cordially yours / Martha D. (Dickinson) Bianchi / P.S. Please ask your friend Mr. (?) to call me up before he leaves town - I missed his (??) yesterday and want to return his Emily (?) and get the (???) he promised us.// M.D.B // Saturday June 20th".

Condition: FAIR PLUS book, fair because the top of the spine is frayed with tears and the spine gilt has worn off (though the embossed lettering is still visible), otherwise the covers are in good condition, solid and bound well. Internally, the pages are in very good condition, there is offsetting to the half title page where an article announcing the death of Martha Bianchi was laid in (it is now in its own plastic holder), else the pages are tight, bright, clean and clear. A solid, nice copy with a spine end that could use some loving repair. In an only FAIR dustjacket that has chips, tears, and tender folds; this dj is known to be very fragile, it is now in a mylar dj protector. The handwritten letter is in VERY GOOD condition, it was folded and has a crease to one corner, otherwise solid with writing that is bold, sharp and clear.

About MARTHA DICKINSON BIANCHI (from the Emily Dickinson Museum website):

******Martha "Mattie" Gilbert Dickinson Bianchi, b.1866 d.1943, the only daughter of Austin and Susan Dickinson. After her two brothers' early deaths and the deaths of her parents, she became the last surviving member of the Dickinson line.

Before heading off to school in 1884, Mattie received a note of advice from her aunt Emily who lived next door: "Be true to yourself, Mattie, and 'Honor and Immortality' - although the first will do - the last is only inferential".

In 1902 while abroad in Bohemia, Martha married the romantic Alexander Bianchi, a captain in the Russian Imperial Horse Guards. He was later jailed on charges of fraud, and the couple separated in 1908, divorcing in 1920.

Bianchi is best known for her work editing her aunt's poetry. After her mother Susan and her aunt Lavinia died, Bianchi inherited the Dickinson manuscripts that remained in her family. In 1914 Bianchi published The Single Hound: Poems of Emily Dickinson, which helped revive interest in her aunt's work. She published several more books of Dickinson's poetry and letters as well her own reminiscences about her aunt.******