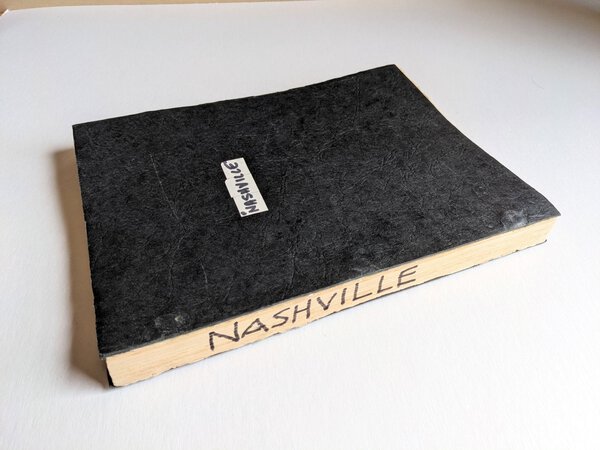 A RELEASE DIALOGUE SCRIPT is a special version of the screenplay, a post production version that provides a log of every visual action and every audible sound for each of the frames and footage on the reels of a film. Basically a written copy of a film. One could conceivably create a duplicate of a film based on its Release Dialogue Script.

who worked on the films Star Wars, Taxi Driver, All The President's Men, Close Encounters Of The Third Kind, Exorcist, and many, many more. It is his personal copy, with his SIGNATURE and his ownership NAME/TITLE LABEL on the first page.

Black textured paper covers, inner pages photocopied on 8.5x11 inch light green paper (photocopying was, and still is, how original copies of screenplays were quickly produced and distributed to actors, producers, directors, editors and others involved in a film production), pages printed on one side only, 3-hole punched and bound with 3 brass brads. Approximately 200 pages (pages are numbered by reel, there being 8 reels, each reel with a part A and B).

VERY GOOD condition, the covers have some light general wear, the three brass brads have oxidized, the inner pages are lightly age toned, the first and last page have creases and light soiling, there is a stiff crease to the bottom corner of the last few pages, "NASHVILLE" is written in black marker on the spine page edges, otherwise the inner pages are just lightly used, tight, bright, clean and clear.

RARE ORIGINAL, SIGNED, RELEASE DIALOGUE SCRIPT of one of the greatest American films of the 20th century.

******Nashville is a 1975 American satirical musical ensemble comedy drama film directed by Robert Altman. The film follows various people involved in the country and gospel music businesses in Nashville, Tennessee, over a five-day period, leading up to a gala concert for a populist outsider running for President on the Replacement Party ticket.

Nashville was released by Paramount Pictures in the summer of 1975, and opened to critical acclaim. Patrick McGilligan of The Boston Globe wrote that it was "perhaps the most talked about American movie since Orson Welles' Citizen Kane." Nashville was nominated for a total of 11 Golden Globe Awards, to date the highest number of nominations received by one film. It was also nominated for five Academy Awards, including Best Picture, Best Director (Altman), and Best Supporting Actress (both Lily Tomlin and Ronee Blakely). Selected for preservation in the United States National Film Registry in 1992, it is now considered Altman's magnum opus, and by many critics to be one of the greatest films of all time.******

About DAN PERRI (from Wikipedia):

Possibly Perri's best known title sequence project came about in 1976 when he was introduced to director George Lucas, who invited Perri to Industrial Light & Magic. Perri eventually developed a concept for presenting a textual introduction to the film in which the credits are shown distorted by a sharp perspective and rolling along towards a distant vanishing point. Lucas approved the idea and Perri produced sketches and prototype mechanical artwork that gave birth to the now familiar opening crawl sequence that appears in the Star Wars films.

Perri has stated that Lucas offered him a share of royalties from the film in lieu of his ordinary fee; Perri rejected the offer and has regretted his choice ever since.******