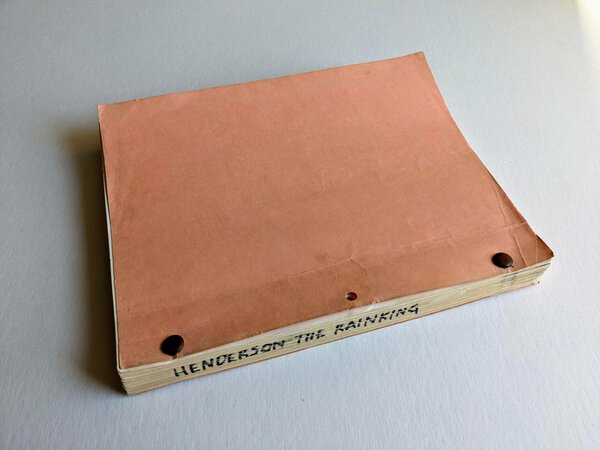 HENDERSON THE RAIN KING. An Original Unproduced SCREENPLAY by ROBERT C. JONES from a Novel by SAUL BELLOW. Stated FIRST DRAFT. Undated but circa 1980.

SIGNED by DEAN TAVOULARIS, a highly regarded film Art Director, on the title page. He presumably was to be the Art / Production Director for this film.

Orange paper covers, inner pages photocopied on 8.5x11 inch white paper (photocopying was, and still is, how original copies of screenplays were quickly produced and distributed to actors, producers, directors, editors and others involved in a film production), pages printed on one side only, 3 hole punched and bound with 2 brass brads, 187 pages plus the title page.

VERY GOOD condition, the covers have some general wear, toning and signs of handling, the two brass brads have oxidized, the inner pages are bright, clean, clear and unmarked.

About the Screenwriter ROBERT C. JONES (from Wikipedia):

About DEAN TAVOULARIS (from Wikipedia):

******Dean Tavoularis, b.1932, is an American motion picture production designer and art director whose work appeared in numerous box office hits such as: The Godfather films, The Conversation, Apocalypse Now, Bonnie and Clyde, and many others. He received five Academy Award nominations for Best Art Direction, winning one for The Godfather Part II.******

About HENDERSON THE RAIN KING by SAUL BELLOW (from Wikipedia):

******HENDERSON THE RAIN KING is a 1959 novel by Saul Bellow. The book's blend of philosophical discourse and comic adventure has helped make it one of his more popular works. It is said to be Bellow's favorite among his books. It was ranked number 21 on Modern Library's list of the 100 Best Novels in the English language.******

RARE UNPRODUCED SCREENPLAY by a GREAT SCREENWRITER based on ONE OF THE GREAT NOVELS of the 20th Century and SIGNED by an ACADEMY AWARD WINNING FILM PRODUCTION DESIGNER.