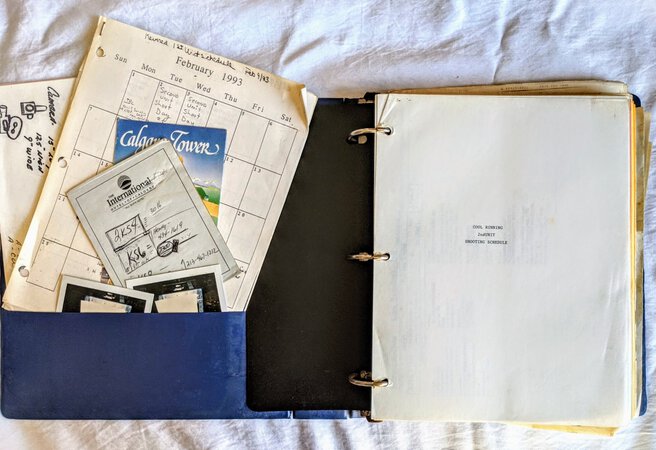 COOL RUNNINGS (Jamaica has a Bobsled Team!). Original working screenplay draft with many different color revision pages and handwritten notes, plus shooting schedules, shot setups, drawings of the bobsled with installed camera positions, map of the bobsled route with camera setup locations, crew lists, etc. All in a blue three ring binder, including many loose pages in the pockets on the inside front and rear covers.

This Screenplay and working "kit" was OWNED and USED by the film's SECOND UNIT DIRECTOR OF PHOTOGRAPHY, REXFORD L. METZ, with his name on the binder's spine. It clearly was extensively used by him in preparation for shooting various scenes, including equipment needed, thoughts on camera angles and set ups, phone numbers of personnel, etc.

The screenplay is bound in the binder along with other relevant stuff preceding and following it. The screenplay was written by Tommy Swerdlow and Michael Goldberg. It is dated 2/5/92 and has revision pages going to 1/12/93. It was being produced by Steel Pictures and was released by Buena Vista Films (Disney) on 10/1/93. The screenplay is photocopied on 8.5x11 inch sheets (photocopying was, and still is, how original copies of screenplays were quickly produced and distributed to actors, producers, directors, editors and others involved in a film), 103 numbered pages plus quite a few extra "A" and "B" pages (e.g. 36, 36A, 36B, 37), plus a title page, pages printed on one side only, 3 hole punched on the left side. There are many different color revision pages from many different dates. These original revised screenplays are known as "rainbow scripts". The dates of the revised pages are listed on the title page.

There are extensive relevant handwritten notes and highlighting on some of the latter pages that involve filming of the running of the Jamaican bobsled on the bobsled track, otherwise just a few marks on some other pages here and there that concern set-up shots in Calgary.

There are also hand drawn bobsleds (I love those!), as well as handwritten notes and marks on a bobsled track map, and on other items and documents.

Condition: Everything is in GOOD to VERY GOOD condition, some of the loose items have creases and signs of handling and use, as they should.

An incredible, unique collection that puts you on the set of COOL RUNNINGS along with the Second Unit DIRECTOR OF PHOTOGRAPHY as he prepares to film the action sequences. What could be cooler than that?

About REXFORD L. METZ (from IMDb):

INTERNATIONAL BUYERS PLEASE NOTE: This item is heavy and will require substantial additional shipping charges. After placing your order you will be notified of the additional charges and be able to accept or reject them before your payment is processed. Or you can contact us ahead of time to find out the shipping charge to your country. Thanks.