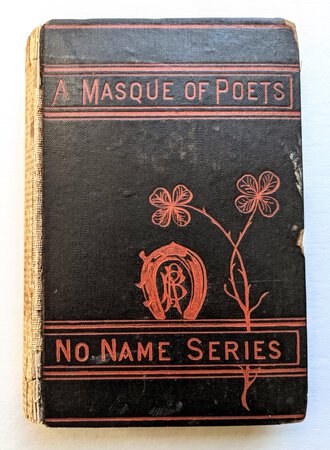 A MASQUE OF POETS - NO NAME SERIES. A poetry collection where the poets are not identified, though all have been subsequently.

EMILY DICKINSON has a single poem in the collection, titled "SUCCESS", which appears on page 174. IT IS THE ONLY ONE OF HER POEMS THAT WAS PUBLISHED IN BOOK FORM DURING HER LIFETIME. (It was only after Emily Dickinson's death in 1886 that her cache of manuscript poems was discovered by her sister Lavinia and began to appear.)

Others in the collection, (also not identified in the book) include: Louisa May Alcott, Helen Hunt Jackson, Christina Rossetti, and others.

Only FAIR condition: the spine covering is missing (a strip of the spine covering is laid in), the boards are worn through at the corners, the binding is shaky but holding together with the sewn binding, the front free endpaper has half-dollar size remnants of paper that were glued to it at one point, the rear free endpaper has tears and holes (both the front and rear endpapers are Publisher's ads), there are some small marks and smudges here and there. Despite the flaws, this is a complete copy with a nice clean text block and front and rear boards that are attractive. A very suitable copy for loving repair.