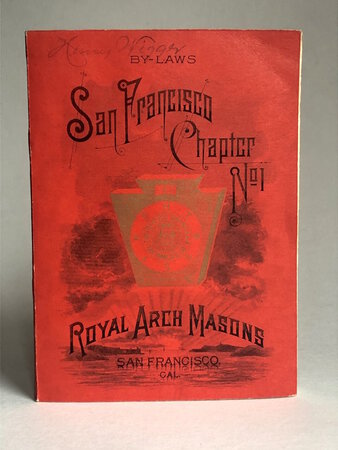 Before San Francisco's infamous secret men's clubs like the Bohemian Club, and the Pacific Union Club, there were The Royal Arch Masons, established in The City in 1850. All of San Francisco's wealthy leading white men were members of Chapter Number One. Members were professionals, shop owners and businessmen with shared social class and economic background, and this Gold Rush era fraternal network helped make them even wealthier. Unusual for the time, many members were Jewish, membership gave them respectability and practical advantages. A unique glimpse at the men San Francisco named streets and buildings after.

A truly ephemeral item, I can't find any original 1897 examples, I've search auction records and rare book catalogues, this is a unique piece of early San Francisco ephemera. What makes it even more desirable is it's provenance, having belonged to Cemetery Designer Henry Wigger (1874-1948), who along with his wife Hannah Rohde Wigger (1884-1968), were a prominent San Francisco and Napa pioneer family.

******* You can read about HENRY WIGGER in the History of Solano County and Napa County California by Marguerite Hunt and Harry Lawrence Gunn, S. J. Clarke Publishing Co., Chicago 1926.

From his wife's obituary:

HANNAH ROHDE WIGGER (San Francisco 1884 - 1968 Napa) Burial Tulocay Cemetery, Napa. A resident of Napa since 1907 and matriarch of a prominent Napa family. Widow of the Landscape Architect for Napa State Hospital when it was built. Mrs. Wigger was the mother of Napa County Supervisor Henry Martin Wigger, Rohde V. and James G. Wigger, who operate Wigger Brothers clothing store, and Dr. Wilder N. Wigger of San Francisco; and grandmother of seven and great-grandmother of three. ******