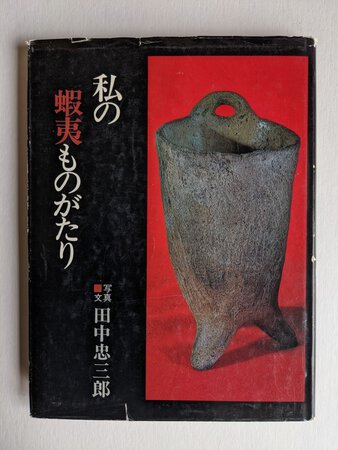 Condition: NEAR FINE book, tight, bright, clean and unmarked; in a FAIR dustjacket that has wear, creases and closed tears to its edges, corners and spine ends; rubbing, scratches and some scrapes to its front and rear panels and spine; and some clear tape reinforcement to its backside; nonetheless the dj is complete and doing it job.

About the Ezo collection of Takaka Chuzaburo (roughly translated from the Japanese by Google):

******Ethnologist and Aomori native Tanaka Chuzaburo spent his life researching and documenting the culture of his home. This book features implements and clothing from the collection Tanaka spent his life amassing and introduced the culture and lifestyles developed by the people of Aomori to survive the region's long, harsh winters. In an age of rampant cheap and disposable consumption, this book provides an opportunity to trace the handicrafts and way of life of people who truly cared for their belongings through tireless maintenance and repurposing.******

About EZO (from Wikipedia):