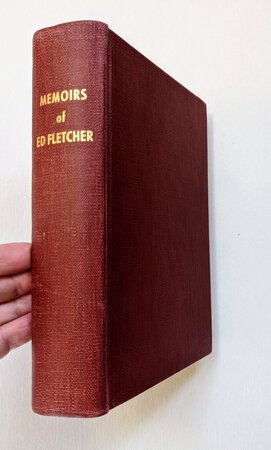 First (and only) Edition, Limited, Privately Published. From the limitation page: "This book of memoirs to my children is a privately printed limited edition to be presented to our family, close friends and associates. Your copy is number 1107."

SIGNED and INSCRIBED on the Limitation Page by the author, ED FLETCHER, who added his wife Mary's name: "To our good friend Mrs. K. W. Hamilton / With kindest regards / Mary & Ed Fletcher".

Hardcover book, burgundy cloth covered boards, gilt title to the spine, 6x9 inches, 751 pages. Rich with Fletcher family genealogy, often as it intertwined with others in the building of San Diego..

Illustrated throughout with b&w photographs of Fletcher's family and of important early San Diego civic, military, political and religious leaders who were involved in the building and development of the County.

GOOD MINUS condition. The covers are solid and sharp cornered with just a hint of wear to the corners and spine ends. Internally, the front inner hinge is cracked but holding well; the first and last few pages are foxed and are toned from offsetting and there is some light foxing to the other pages here and there throughout; some pages have light creases; and the pages have a light, old musty smell likely from storage; otherwise the pages are tight, bright, clean, clear and unmarked. Overall a solid, nice copy but with a light old book smell.

About ED FLETCHER and his IMPORTANT PLACE in SAN DIEGO HISTORY:

In 1888 Fletcher, age 15, came to San Diego alone, and with $6.10 in his pocket began selling produce. In 1901, he entered the real estate business as a land agent, and started a partnership in 1908 with William J. Gross, silent film actor and producer. That partnership developed Grossmont, Mt. Helix, and Del Mar. Fletcher donated land on Mt. Helix where Easter Sunrise services are held.

Fletcher became interested in developing San Diego's infrastructure and saw to it that many road projects were completed in and around the City. With Fred Jackson, Fletcher raised civic interest in building a road to Imperial Valley, then a plank road across the desert to Yuma, Arizona. Fletcher was later active in having state and U.S. highways built to San Diego.

Fletcher also took an interest in projects delivering water to San Diego, including creating Lake Hodges. Fletcher and Montana businessman James A. Murray purchased the San Diego Flume Company on June 1, 1910, renaming it the Cuyamaca Water Company. Their company made major improvements to the water system of San Diego County, including the construction of the San Vicente Dam and Reservoir. Fletcher also raised funds to buy land for the Naval Training Station in San Diego, and for building the YMCA.

In 1934 Fletcher was elected to the California State Senate, and served until 1947. Sometime while in the Senate, he switched his party affiliation from Republican to Democratic. He authored laws creating the San Diego County Water Authority and transferring ownership of Mission Bay to the city.

Fletcher married Mary C. Batchelder April 8, 1896 at Ayer, Massachusetts. They had ten children.****** (Ten children! There must be a lot of Fletcher descendants out and about!)