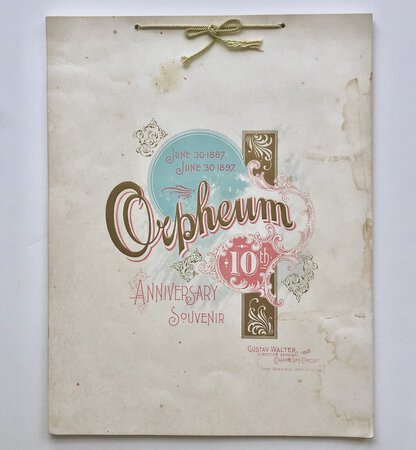 One of the greatest performance spaces in Bay Area history, the Orpheum opened on O'Farrell street by Union Square on June 30, 1887. It was conceived, built and run by notable Impresario Gustav Walter, a German immigrant to San Francisco. This scarce Orpheum Viewbook is an illustrated retrospective of its historic first decade 1887 to 1897. Filled with sixty-five (65) b&w photographic portraits and fifty-three (53) unique biographical sketches of the principal artists, musicians, Vaudeville and Burlesque stars, drag queens, circus performers, opera stars, comedians, female impersonators, and variety show entertainers who appeared during this most successful first decade. A long list of other notable performers appears at the end. Calamitously, only nine years later, the Orpheum was totally destroyed in the 1906 earthquake and fire.

Among the featured entertainers are Albert and Mamie Anderson, an important African American Vaudeville husband and wife duo.