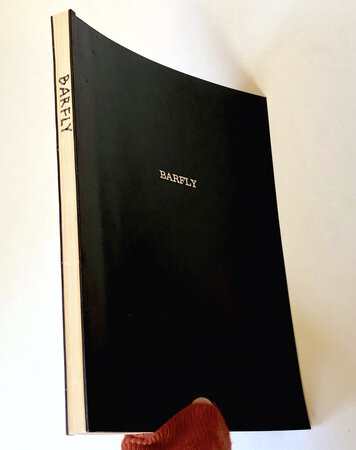 In 1979, rebel poet Charles Bukowski (1920-1994) was asked to write a screenplay for film director Barbet Schroeder, who promised to film it exactly as Bukowski wrote it. This was Bukowski's first screenplay. Originally titled "The Rats Of Thirst," this early 1980 Barfly draft script is exactly as Bukowski wrote it. The film was eventually released in 1987. This screenplay predates two publications about the film - 1984's Piaget Press "Barfly," and 1987's Black Sparrow Press "The Movie: Barfly." Cannon Film's released a final shooting script in 1986. The experience of filming Barfly became the subject of Bukowski's 1989 novel Hollywood where he refers to the movie as The Dance of Jim Beam.

This script was the personal copy of Academy Award winning production designer Dean Tavoularis, with his signature on the title page in black ink. I don't know why he had it, he's not credited on the film, but early on he was probably approached to be the production designer however many years went by before it was filmed.

I can't find information about why this draft is called "Jazz-Soup" I can only suspect they wanted a cool hipster title for this early draft.

Black card covers with BARFLY embossed in gold on the front cover, 11" x 8.5", 109 photocopied pages (photocopying was, and still is, how original copies of screenplays were quickly produced and distributed to studios, directors, editors, producers, designers, and others involved in the films production), pages printed on one side only, Velo bound, title handwritten on spine in black ink. VERY GOOD Condition: just lightly used with a touch of age toning, otherwise, tight, bright, clean and unmarked. An excellent signed copy.

***** Charles Bukowski talks about Barfly -- from an interview with him on the set of Barfly with film critic Roger Ebert in 1987:

"The movie is called 'Barfly,' and it's about me, because that's what I was, a bar fly," Bukowski explained. "You ran errands for sadists and let the bartender beat you up, because you were the bar clown. You filled people's days with your presence, and maybe you'd get a few free drinks now and then."

"The way we got involved," he said, "was I picked up this phone one day and it was Barbet Schroeder calling from Paris. I'm drinking, I hung up. Never heard of him. You meet a lot of phonies. I hang up, he calls back, he wants me to write a movie for him. I tell him I hate movies. He mentions $20,000. I ask him when he's coming over."

"Schroeder has been trying to make this movie for seven years," Bukowski said. "A few months ago, it looked like Cannon was about to cancel it. Barbet goes into the office of Menahem Golan, the president of Cannon, with an electric handsaw. He pulls out a syringe of Novocain and shoots it into his little finger. He says he will cut off his finger if Menahem doesn't make the movie, and that he will continue to cut off parts of his body and send them to Menahem until he agrees to make the movie. Menahem tells him to go to hell. Barbet plugs in the handsaw." *****