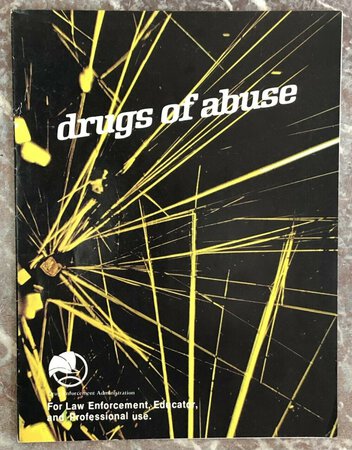 In 1971 Richard Nixon declares War on Drugs. He creates the Drug Enforcement Administration (DEA) in 1973. A nascent product of the DEA. Oh and if your looking for Quaaludes - they weren't illegal until the mid 1980s.

DRUGS OF ABUSE. Published by the Drug Enforcement Administration, U.S. Department of Justice, Washington, D.C., 1974 Printing. Illustrated softcovers, 11" x 8.25", side staple bound, 16 pages including covers, richly illustrated with photographs of drugs, drug paraphernalia, and drug abusers, plus a colorful centerfold table with slang terms for drugs, signs of abuse and frightening side effects. Scarce, no copies held in OCLC collections worldwide. VERY GOOD Condition: some scraping and creasing at the spine fold, some shelf wear, and light signs of handling, overall tight, bright, clean and unmarked. An excellent example of 1970s drug ephemera.