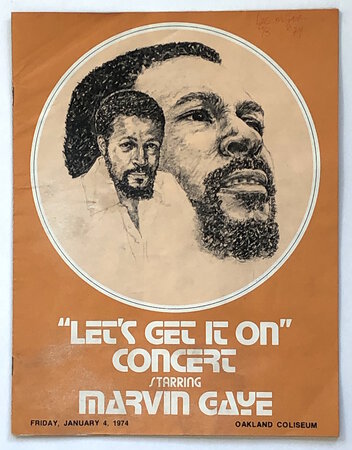 Souvenir Program, printed by Abbey Press, Inc, Oakland, California, 1974. First and only edition, softcover, 11" x 8.5", side staple bound, 16 pages (including covers), illustrated thought with black & white and and sepia toned photographs of Marvin Gaye and other performers including Ashford and Simpson, Johnny Talbot, The Del Tones, the two M.C's Wally Cox and local television news anchor Belva Davis, Valerie Campbell after party VIP Model, and producer Melvin Reid. The text includes a biography of Marvin Gaye, an interview with Ashford and Simpson by noted Black music writer Vernon Gibbs, a Proclamation by the City of Berkeley recognizing Gaye as a "Gentleman of the Arts," and a Proclamation from the City of Oakland designating January 4, 1974 as "Marvin Gaye Day." GOOD CONDITION: Complete as issued, the program has some light creases and bends from handling and use, the staples have a little rust but are holding well, the front cover has some areas of light abrasion and red pen upper margin notations, otherwise very bright and clean and without any tears or fading, it appears to have been stored away since the concert. I have yet to see another example. A scarce and highly collectable piece of Motown and Oakland memorabilia.

After over four years without touring and the success of his 1971 album What's Going On and his best selling record ever 1973's Let's Get It On, Marvin Gaye's fans and Motown were clamoring for a big concert tour. Rumor had it Marvin promised an Oakland concert to Wally Cox, his friend, soul singer, producer and Oakland native. But as the concert date got closer, Marvin balked. Cox and his partner, Mel Reid (owner of Reid's Records in Berkeley, one of the first Black owned record shops in California) who was a fixture in the local gospel music community, had already advertised the show. They told Marvin that he owed it to the Black community to do the Oakland concert and he did. The January 4, 1974 Oakland Coliseum performance was a major success and the live album he recorded of this concert, Marvin Gaye Live! went Top 10.