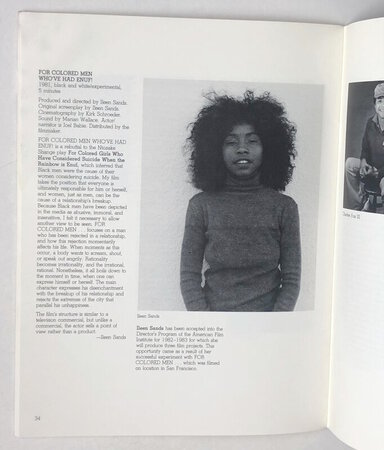 Many of the filmmakers in this exhibition catalogue are Black Women.

Acclaimed African American Film Scholar Clyde Taylor writes in the catalogue's historic essay on Black Cinema, "The films showcased by the Black On Black series are part of a new Black cinema, a vital art movement whose popular recognition may lie just over the horizon .... Still, the paradox remains. A fuller, more balanced, responsible portrayal of Black people is found in this new cinema than in Hollywood's total output, including the Black exploitation films of the 1970's. Yet the new Black cinema goes barely noticed by those searching for "positive Black images". Why? The perspective of history is needed to understand this contradiction and to grasp the significance of this Black renaissance in films."

Of note: Clyde Taylor coined the term L.A. Rebellion, a movement inspired by UCLA graduate student Charles Burnett's film "Killer of Sheep" (found in this catalogue) where young Black filmmakers concerned with the portrayal of African Americans on screen, saw film as a means for social change.

Published by the Saint Louis Art Museum, St. Louis, Missouri, 1982. First edition, first printing, Softcover, embossed black card covers, 11" x 8.5", side staple bound, glassine front and rear endpapers, 37 (3) pages, illustrated with 29 black & white portraits and film stills. GOOD CONDITION: covers are lightly creased around staples, and have some light wear, there is waviness and light shorelining to the upper front edge of the covers and the inner pages probably from long ago contact with water, there is an Oakland Museum Library stamp on the glassine front free endpaper, otherwise tight, bright, clean and unmarked. A solid, respectable copy of this scarce exhibition catalogue.