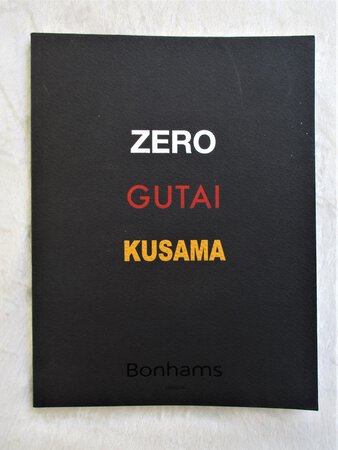 ZERO GUTAI KUSAMA. Catalogue for the Exhibition that took place at Bonhams, London, from October 11 through October 20, 2015.

Illustrated throughout in color and b&w.

From the Bonhams announcement of the show:

****** 20 masterpieces by the Gutai and ZERO groups from a private collection on exhibition at Bonhams from October 11 through October 20.

Works by Yayoi Kusama, including Macaroni Shirt, Red Dots and Phallic Bottle Tray, will also be on show.

Bonhams is to display lost masterpieces from a private collection by Gutai and ZERO groups for the first time since the 1960s. It offers an opportunity to reassess these ground breaking art movements, both of which have recently been in the spotlight in exhibitions such as Zero: Countdown to Tomorrow at The Guggenheim, New York. Writing about the groups for Bonhams Magazine, Serpentine Co-Director, Hans Ulrich Obrist described the emergence of these artists as one of the great moments of the avant garde in the post war era.

Bonhams Head of Contemporary Art, Ralph Taylor, says, "To have the opportunity to host this museum quality collection at Bonhams is a rare and wonderful privilege. It is exactly where Bonhams excels; demonstrating connoisseurship and using the profile of an auction house to rediscover forgotten masterpieces and to champion the very best in Post War & Contemporary art."

Among the works to be on view in Bonhams headquarters on New Bond Street are: Three works from Yayoi Kusama's first solo European show in 1965: Macaroni Shirt, Red Dots and Phallic Bottle Tray; Kazuo Shiraga's Red Fan; A suite of four early and delicate works by Jan Schoonhoven; A large piece by Günther Uecker from 1967.

The first time ZERO and Gutai art were shown together was at the 1965 Stedelijk Museum's Nul exhibition. In 2006, this Nul 1965 show was reconstructed in the ZERO exhibition at Museum Kunst Palast in Düsseldorf. This was the beginning of the revival in both ZERO and Gutai we have witnessed today.******