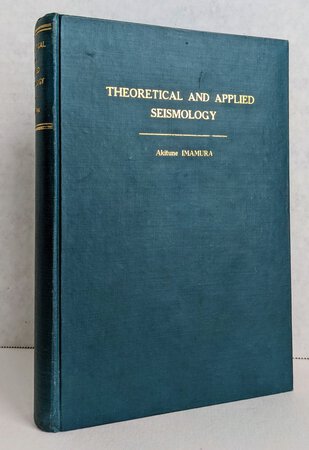 THEORETICAL AND APPLIED SEISMOLOGY, by noted Japanese Seismologist AKITUNE IMAMURA (aka AKITSUNE IMAMURA). Imamura anticipated the theory of Plate Tectonics, and predicted the Great Kanto earthquake that devastated Tokyo and killed over 100,000 people. The work is considered a pre WWII classic in the field. Translated from the Japanese.

Published by Maruzen Co., Tokyo, 1937. There is a small Japanese label on the front free endpaper that indicates this book was originally from a Shirokiya store, perhaps in Edo, Japan (search Shirokiya Wikipedia).

About AKITSUNE IMAMURA (from Wikipedia):

******Akitsune Imamura, b.1870 d.1948, was a Japanese seismologist. He studied at the Imperial University of Tokyo. In 1899, in anticipation of the later theory of plate tectonics, he argued that the tsunami that struck the Sanriku coast of Honshu island in 1896 (known as the Meiji Sanriku tsunami) had been triggered by movements of the earth's crust under the sea. In a paper written in 1905, he predicted that a major earthquake would hit the Kanto region around Tokyo within 50 years and kill over 100,000 people, and advocated that measures be taken. His worries materialized when the Great Kanto earthquake devastated Tokyo in 1923, claiming more than 100,000 victims. In 1939, while working for the Seismological Observatory of Tokyo University, Imamura made a reconstruction of Zhang Heng's seismoscope (132 CE), considered to have been the first such device ever made.******