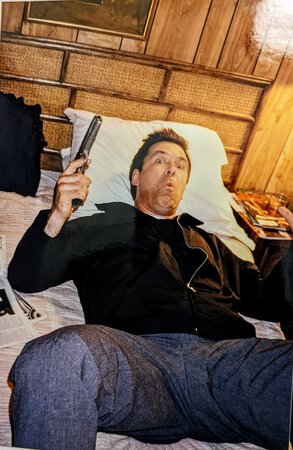 Award Winning MAKE-UP ARTIST ALLAN APONE'S PERSONAL WORKING COPY, with his name at the top of the title page. Allan Apone was the HEAD OF THE MAKEUP DEPARTMENT for the film.

What makes Allan Apone's copy especially rare and wonderful is that it is filled with 105 unique color photographs of the stars, including many of a 1998 Alec Baldwin. The photos are tipped-on to the blank backsides of many pages of the script, facing pages in which the stars have a scene requiring special makeup. The photographs show the stars in various poses, mostly without make-up (a few with some trial blood and wounds), mostly in what appear to be their home or yard settings, in poses and with facial expressions probably called for by Apone in order to help him decide how to make them up for various scenes (what scar goes where, what blood should cover that nice shirt, how should that face look when struck by a bullet, how old should I make that face look, etc.) The photographs are mostly 3x5 inch, all in color, all unique.

A true working copy. There is green highlighting throughout, and blue lines highlighting scenes requiring makeup: "Blood is on his right hand and the right sleeve of his jacket. He takes off the jacket, turns it inside out, uses it to wipe his hand clean." There are also a couple notes written in the margin regarding makeup: "Muscle bleeds from right side corner of mouth down chin".,

The script is a revised draft dated March 25, 1998, with multi-colored revision pages (blue, pink, and yellow) dated to April 13, 1998. There are 113 8.5x11 inch pages, various colors, .photocopied on one side only, 3-hole punched in the left margin, bound with 2 brass brads. The script was written by Scott Sanders & Arthur Krystal, based on the novel by Patrick Quinn. It was directed by Scott Sanders.

GOOD Condition: The script shows general signs of handling and use (it's a working copy after all) with some creases and a bit of soiling here and there; the title page has torn from the brass brads and is laid on loosely, it has tearing and creases around its upper and lower holes, and some edge wear and corner creases; otherwise a complete, bright, clean and clear copy. The photographs are all very bright and sharp, a couple are creased where the script folded on them incorrectly.

A unique insider look into the world of film makeup. With the 105 photographs of the stars, most as blank slates ready to be changed by the makeup artist, this script is truly a wonder.

And there is Alec Baldwin to boot!

About ALLAN A. APONE (from IMDB):

******A multi-award nominated makeup artist. Apone has served as a makeup artist on over 170 films and 150 television episodes. He has been the personal makeup artist Samuel L. Jackson, Dustin Hoffman, Chris Evans, Gerard Butler, Tom Berringer, Sir Ben Kingsley to name a few.

He is president and CEO of Makeup & Effects Laboratories (MEL), a special effects makeup facility, he opened in 1979. MEL has grown from 500 square feet to over 20,000 square feet, and has provided special effects for over 145 films and 25 television shows. Recent film projects include Westworld, Divergent, Django Unchained, The Last Thing He Wanted, Den of Thieves, Captain America; Civil War, Avengers: Age of Ultron, Killing Reagan, 22 Jump Street, and Suicide Squad.