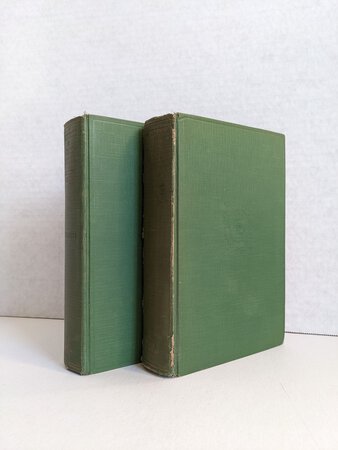 THE BOOK OF JACK LONDON, by CHARMIAN LONDON. Volumes I and II. Published by The Century Co, New York, 1921. First edition.

Each Book is SIGNED and INSCRIBED. Each book also has Jack London's personal WOLF'S HEAD BOOKPLATE and an original PHOTOGRAPH of Jack London.

Volume I is INSCRIBED by ELIZA LONDON SHEPARD (the beloved step-sister of Jack London) on the front free endpaper, and by CHARMIAN LONDON (Jack London's second wife and seafaring partner) on the half-title page.

Eliza's inscription reads: "Wake Robin Lodge, Glen Ellen Ca. / Dearest Anna / wishing you Christmas happiness and all the season's cheer with everything that's best in life to last through the New Year. We all wish you were going to spend Christmas with us again. / All Love from the Shepards / Eliza / Dec. 25, '33."

Charmian's inscription reads: "Dearest dear Mummy and Nan / May the humble mere author say a word? I write this in your own hospitable house with a heart full of affection for your kindness to me, and to my dear sis, Eliza! / Charmian / Los Angeles California 1935."

Volume II is INSCRIBED by CHARMIAN LONDON on the half-title page and by IRVING and MILDRED [Shepard], the son and step-daughter of ELIZA LONDON SHEPARD, on the front free-endpaper.

Charmian's inscription reads: "Dear Nan / I just have to kick into the party with Eliza, you see. I hope you've had fun reading this volume - a lot about the dear Ranch, as it was! / Devotedly yours, / Charmin London / Los Angeles California, / March '35."

GOOD CONDITION: The spine cloth covering of both volumes is cracked along the spine folds, there is some fraying to the spine ends, the spine gilt has mostly faded; the front and rear boards of both volumes are nice with just a bit of wear to their corner tips. Internally, the pages are lightly toned, otherwise tight, bright, clean and clear. A solid, presentable set of these two volumes.

About CHARMIAN LONDON (from Wikipedia):

******Charmian Kittredge London, b.1871 d.1955, was Jack London's second wife. Biographer Russ Kingman called Charmian "Jack's soul mate, always at his side, and a perfect match." Jack London died in 1916, bequeathing nearly his entire estate to Charmian. Charmian died in 1955, at the age of 83. Her ashes rest beside her husband Jack's under the rock that marks their grave near Glen Ellen, California.******

******Eliza London Shepard, b.1866 d.1939, daughter of John and Anna Jane London. In 1876 her father married Flora Wellman and Eliza became step-sister to Jack. Jack accepted Eliza her as his real sister. Jack adored her.

In 1910 Eliza and her son Irving lived on the Beauty Ranch in Glen Ellen, where Jack hired her as both ranch supervisor and overseer of the Wolf House Project. Following Jack's death, Eliza struck a partnership with Charmian. Eliza handled most business matters, notably the continuation of the ranch and movie right contracts, while Charmian handled most of the literary estate. The women were devoted to each other.******