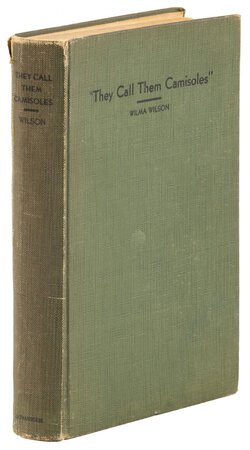 "THEY CALL THEM CAMISOLES", by WILMA WILSON. Memoir by Wilma Wilson who was incarcerated in a State Mental Hospital for alcoholism induced insanity, and murdered - had her throat slashed - within two years of her release. A look at how women drinkers were treated as insane in the mid 20th century.

SIGNED, INSCRIBED and DATED by WILMA WILSON on the front free-endpaper: "For Dr. Armstrong / with appreciation / Wilma Wilson / May, 1941".

In 1939 Wilma Wilson was incarcerated in the Camarillo State Mental Hospital in Camarillo, California, to "fix" her drinking problem. Women with drinking problems were often considered insane and rehabilitation involved incarcerating them in mental wards with the truly insane.

An alternately grim and humorous memoir of the female alcoholic author's stay in the Camarillo State Mental Hospital. The "camisoles" of the title are, of course, straitjackets. Wilson tells of her drunken escapades just before being incarcerated for "treatment", then of her time in the Mental Hospital. At the end of the book she is about to finally be released, being declared sane after undergoing successful treatment.

Wilson never denies that she was an alcoholic in need of help, but her drinking problem should not have defined her as an insane woman.

GOOD condition, the covers have wear at the corner tips, scrapes along the spine folds, and some fraying to the spine ends; internally, the rear inner hinge is split but holding well, there is scattered light foxing, and a few short tears to the rear free endpaper. A solid, presentable, used copy.

As noted above, the book is a presentation copy, SIGNED and INSCRIBED by WILMA WILSON to DR. ARMSTRONG in 1941. Likely he was a doctor who actually helped her. At the blank space at the bottom of the last page is a handwritten "Epilogue", perhaps written by Dr. Armstrong who owned this copy, that reads:

"Epilogue - Wilma Wilson was found nude in bed with her throat slashed, December 1942. A short article in the L.A. Times had captioned her ultimate fate as an alcoholic and drug addict."

An interesting look at how women alcoholics were seen and treated in the mid twentieth century.

SCARCE in any form. Almost IMPOSSIBLE TO FIND signed and inscribed.

About the CAMARILLO STATE MENTAL HOSPITAL (from Wikipedia and other Internet sources):

******Camarillo State Mental Hospital was a public psychiatric hospital for mentally ill patients in Camarillo, California. The hospital was in operation from 1936 to 1997.

In 1937, 300 women patients were transferred to Camarillo from other state hospitals.

Women were often incarcerated in the mental hospital for alcoholism, sometimes brought there by police officers who likely were heavier drinkers than the women they were incarcerating. An early form of tough love "Rehab", these women were put in wards alongside the seriously mentally ill.

Men were sometimes incarcerated there for alcohol and drug reasons as well, but usually only if they had committed crimes. The men men were given more privileges, treated better, and often released sooner than women.