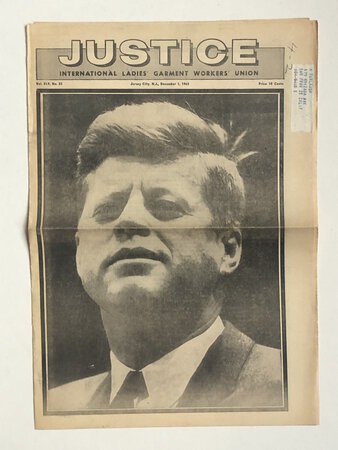 John Fitzgerald Kennedy was a strong ally of the International Ladies' Garment Workers Union (ILGWU) and had worked with Union President David Dubinsky on many important issues. JFK's assassination affected everyone and the editors of Justice printed a Memorial Edition which also included a Message of Support to Lyndon Baines Johnson from Dubinsky. JUSTICE was the official publication of the ILGWU from 1919 to 1995.

This JFK Memorial Edition features a full page portrait of JFK with a black memorial border on the front page, inside, within a black memorial border is President Kennedy's Inaugural Address delivered on January 20, 1962 with a b&w photograph of him speaking from the White House balcony. This is followed by the text of JFK's speech before the Convention of the American Federation of Labor Congress of Industrial Organizations (AFLCIO) in New York City on November 15, 1963, also with a black memorial border and b&w photo of him speaking. The back page shows a b&w photo of LBJ and a Message of Support in his new role as President of the United States sent to him by union leader David Dubinsky.

Founded in 1900, ILGWU was one of the largest and most significant labor unions in the American Labor Movement and one of the first with a primarily female membership. It's role in the history of women and immigrant Jewish and Italian women continues to be relevant today. Justice was published in English, Italian, Spanish, and Yiddish with much variation in content.

***** About the ILGWU from the Kheel Center for Labor Management Documentation and Archives Cornell University Library:

The International Ladies' Garment Workers' Union was founded in New York City in 1900 by mostly Socialist immigrant workers who sought to unite the various crafts in the growing women's garment industry. The union soon reflected changes in the sector and rapidly organized thousands of unskilled and semi-skilled women, mostly Jewish and Italian young immigrants. Exemplifying the "new unionism," the ILGWU led two of the most widespread and best-known industrial strikes of the early Twentieth Century: the shirtwaist makers' strike of 1909 in New York City and the cloak makers' strike of 1910 in Chicago. The union also tried to adapt to the fragmented and unstable nature of the industry. It adopted the "protocol of peace," a system of industrial relations that attempted to ensure stability and limit strikes and production disruption by providing for an arbitration system to resolve disputes.

The ILGWU exemplified the European-style social unionism of its founding members. They pursued bread and butter issues but provided educational opportunities, benefits, and social programs to union members as well. In 1919, the ILGWU became the first American union to negotiate an unemployment compensation fund that was contributed to by its employers. The ILGWU also pioneered in the establishment of an extremely progressive health care program for its members which included not only regional Union Health Centers but also a resort for union workers, known as Unity House. The Union also had an imaginative and pioneering Education Department which not only trained workers in traditional union techniques, but provided courses in citizenship and the English language.