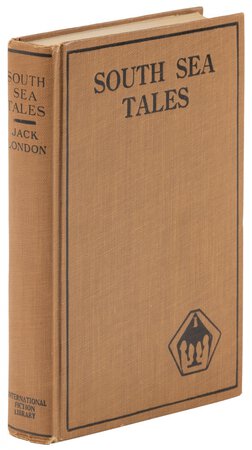 An ORIGINAL 3.5x5.5 inch silver-gelatin PHOTOGRAPH of JACK LONDON busily writing outdoors at his desk. The photograph is mounted on the front pastedown. It is wonderful.

VERY GOOD condition, the covers have some rubbing to the corner tips and spine ends, there is offsetting to the endpapers, otherwise tight, bright, clean, clear and unmarked. A solid, very nice copy.

The stories in the book are: The House of Mapuhi; The Whale Tooth; Mauki; "Yah! Yah! Yah!"; The Heathen; The Terrible Solomons; The Inevitable White Man; and The Seed of McCoy.

RARE and UNIQUE with the INSCRIPTION of ELIZA LONDON and the PHOTOGRAPH of JACK LONDON.

About ELIZA LONDON SHEPARD (from the Sonoma State University website):

In 1910 Eliza and her son Irving lived on the Beauty Ranch in Glen Ellen, where Jack hired her as both ranch supervisor and overseer of the Wolf House Project. Following Jack's death, Eliza struck a partnership with Charmian. Eliza handled most business matters, notably the continuation of the ranch and movie right contracts, while Charmian handled most of the literary estate. Both women had been devoted to and deeply loved by Jack, and they were devoted to each other after his death. Eliza continued to manage the ranch and contract rights until her death in 1939.******