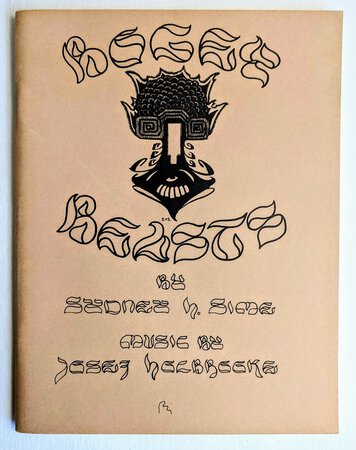 A collection of Sime's imaginary and fantastic creatures, each accompanied by a short song written by the well known but controversial composer Josef Holbrooke. Holbrooke wrote numerous symphonies and orchestral works based on the macabre writings of Edgar Allan Poe. A perfect accompaniment for this book filled with eccentric beasts.

Published by Purple Mouth Press in a LIMITED EDITION of only 500 copies. A facsimile of the 1923 edition published in London by Goodwin & Tabb.

SIDNEY HERBERT SIME (S.H. Sime), b.1865 d.1941, was an English artist in the late Victorian and succeeding periods, mostly remembered for his fantastic and satirical artwork, especially his story illustrations for Irish author Lord Dunsany. - Wikipedia

JOSEPH CHARLES HOLBROOKE, b.1878 d.1958, was an English composer, conductor, and pianist...Holbrooke was fascinated by the writings of Edgar Allan Poe which deal with the supernatural and the macabre, eventually producing over thirty compositions which he referred to as his Poeana. These included orchestral works (The Raven, Ulalume, The Sleeper, Amontillado, and The Pit and the Pendulum), a double concerto for clarinet and bassoon (Tamerlane), choral works (a choral symphony Homage to E.A. Poe, and a poem for chorus and orchestra The Bells), a ballet (The Masque of the Red Death), a multitude of chamber works (such as the Clarinet Quintet Ligeia, the Trio Fairyland, and the Nonet Irene) and several piano pieces. - Wikipedia