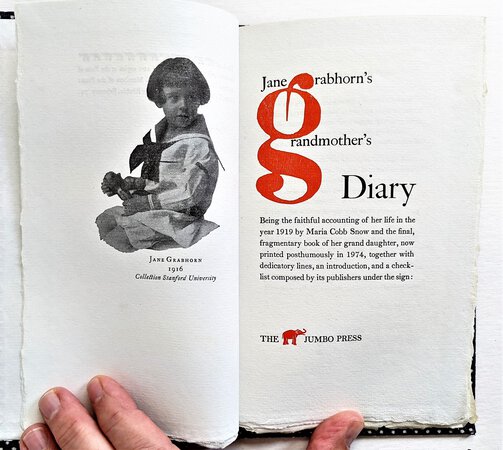 JANE GRABHORN'S GRANDMOTHER'S DIARY - Being the faithful accounting of her life in the year 1919 by Maria Cobb Snow and the final, fragmentary book of her grand daughter, now printed posthumously in 1974, together with dedicatory lines, an introduction, and a check-list composed by its publishers under the sign: The Jumbo Press..

Printed by the Jumbo Press, a press of works hand printed by Jane Grahorn. Jane Grabhorn died in 1974 and this was printed posthumously by Andrew Hoyem. It is the last Jumbo Press publication.

From the colophon page: "The last (Jumbo Press) has been printed in an edition of 100 copies at the Press of Andrew Hoyem in San Francisco...February '74."

Includes a checklist of Jumbo Press publications at the rear, most very limited and scarce. From the introduction to the Checklist: "Our listing is certainly incomplete - so many unique items were prepared for friends...In cases where size of edition is unknown, assume fewer than two dozen copies exist. Unless otherwise noted the author is Jan Grabhorn."

About JANE GRABHORN (from Wikipedia):

******Jane Bissell Grabhorn, b.1911 d.1973, was an American artist, typographer, bookbinder, and printer. She was born in San Francisco. After being educated in France, where she learned bookbinding, she returned to California as a teenager and became a student of Belle McMurtry Young, a prominent bookbinder. In 1932 she married Robert Grabhorn. Beginning in 1934 Grabhorn acquired substantial knowledge of typography and printing through working at the Grabhorn Press, which was owned and operated by her husband and his brother Edwin.

In 1937 Jane Grabhorn established her own imprint, the JUMBO PRESS, which she used as a vehicle for experimentation and artistic expression. Named for a toy press, most of the products of the Jumbo Press were mostly pieces of ephemera and displayed Grabhorn's wit and interest in lighthearted feminist satire. Her best-known work for the Jumbo Press was the treatise A Typographic Discourse for the Distaff Side of Printing, a Book by Ladies.

At the Grabhorn Press she oversaw the bindery until it closed in 1965. She continued typesetting, her preferred avocation, for the rest of her life. She also continued to produce Jumbo Press publications throughout her life, many of which are compiled in The Compleat Jane Grabhorn: A Hodge-Podge of Typographic Ephemera, which she produced with her husband and Andrew Hoyem at the Grabhorn-Hoyem Press in 1968.