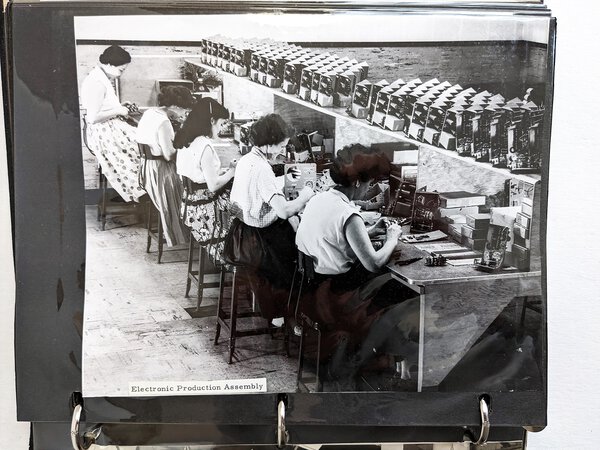 REED RESEARCH INC. - CORPORATE & PRODUCT PRESENTATION ALBUM with 28 Original 8x10 glossy photographs, each with a typed caption on a strip of white paper mounted at the bottom. The photos are loosely inserted in plastic holders and held in a three ring binder. There are two introductory leaves, the second of which states: "Several Products Resulting from Research and Development / Reed Research Inc. / Washington 7 D.C.". Put together by Reed Research Inc., circa mid 1950s.

The photos are all in VERY GOOD condition, bright, sharp, clear; the binder is solid and functioning well, with a few minor scrapes.

An interesting look at Hi-Tech and Hi-Tech Entrepreneurship in the 1950s.

Some of the reports and studies from Reed Research Inc. are listed in WorldCat, including:

The founder of Reed Research Inc. was STANLEY FOSTER REED. Steve Jobs had nothing on this guy who started this company at the age of 23. Read on.

About the FOUNDER of REED RESEARCH INC., Stanley Foster Reed (from Wikipedia):

In 1940, at age 23, Reed started a scientific research company, renting a two story building next to a junkyard in Georgetown. Over the next 20 years he built "Reed Research Inc." into a multi-million dollar company. He worked on issues ranging from safe land mine removal to electrocardiography to language learning laboratories to designs for shipping containers for missiles, obtaining scores of patents in the process. Based solely on his work experience he was admitted to membership in the Society of Naval Architects and received certification as a Professional Engineer.

In 1962, after selling Reed Research to Log-Etronics, Inc., he started Tech-Audit as well as the Reed Research Institute for Creative Studies in the RCA Building on K Street in Washington, where he ran a number of publishing businesses.

Reed started the publications "Directors & Boards" and "Export Today". He was the author of several books, including the best-selling "The Art of M&A" (co-authored with his daughter, Alexandra Lajoux), and "The Toxic Executive".

In the 1960s, he was actively involved in social issues, including sponsoring programs to encourage inner-city entrepreneurship, writing about the poor of Appalachia, and lecturing on ethics.******