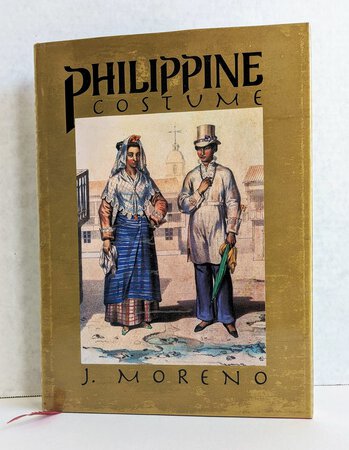 SIGNED and INSCRIBED by PITOY MORENO on the half-title page: "To dear Sandra, / We share with you our pride and memories in the restoration of our national costume in this heritage book. / Sincerely / Pitoy Moreno".

Published by the J. Moreno Foundation, 1995. First edition, so stated.

Condition: GOOD book, a couple small stains to the covers, binding a bit shaky, otherwise sharp, bright, clean and clear. In a GOOD dustjacket that has some shelf rubs and some bubbling to the plastic overlay.

RARE, especially so when SIGNED and INSCRIBED by Jose Pitoy Moreno. Almost never appears for sale.

Many heads of state, royalties, and celebrities from Asia, Europe, and the Americas became his clients for decades, including the First Ladies of the Philippines, First Ladies Nancy Reagan, Pat Nixon and Betty Ford of the United States, Queen Sirikit of Thailand, Queen Sofia of Spain, Princess Margaret of the United Kingdom, the Marquesa de Villaverde, María del Carmen Martínez-Bordiu y Franco, Princess Suga of Japan, Margot Fonteyn, and many others.

Moreno also authored the books Kasalan, a fashion book about Filipino weddings, and Philippine Costume, a book on traditional Filipino clothing and fashion. The French tabloid Le Figaro gave him the title Fashion Czar of Asia, sealing his status as fashion royalty. The title later was used by the Asian fashion community in defining the artistic works of Moreno. Despite the fame, Moreno was known for his rooted behavior, often giving away his prized gowns to people who could not afford lavish weddings.******