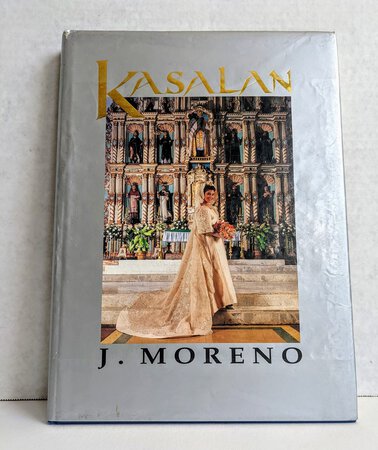 Gift inscription on the front free-endpaper: "Dearest Mom and Dad / Happy Anniversary / We hope this book brings back memories of the weddings you have been a part of. / Love / Paul and Isa". It is followed by a previous owner's circular blindstamp on the half-title page "Library of / Alberto S. Barretto". A quick Internet search shows that there is an Alberto S. Barretto M.D. who is related to a Paul Barretto and an Isabella Barretto. (Yes, privacy is a thing of the past.)

Condition: GOOD book, a light stain to the spine, slight bump to the upper cover corners, gift inscription and previous owner's blindstamp as noted above, otherwise tight, bright, clean, and unmarked. In a GOOD MINUS that has lots of superficial scratches and indents, as if it was used as backing for writing and scribbling on paper, and has a couple quarter size stains on the spine of the backside; nonetheless the dj is bright, clear and doing its job well.

Scarce look at Filipino Weddings and Wedding Fashions, by one who knows.

Many heads of state, royalties, and celebrities from Asia, Europe, and the Americas became his clients for decades, including the First Ladies of the Philippines, First Ladies Nancy Reagan, Pat Nixon and Betty Ford of the United States, Queen Sirikit of Thailand, Queen Sofia of Spain, Princess Margaret of the United Kingdom, the Marquesa de Villaverde, Maria del Carmen Martinez-Bordiú y Franco, Princess Suga of Japan, Margot Fonteyn, and many others..

Moreno also authored the books Kasalan, a fashion book about Filipino weddings, and Philippine Costume, a book on traditional Filipino clothing and fashion. The French tabloid Le Figaro gave him the title Fashion Czar of Asia, sealing his status as fashion royalty. The title later was used by the Asian fashion community in defining the artistic works of Moreno. Despite the fame, Moreno was known for his rooted behavior, often giving away his prized gowns to people who could not afford lavish weddings.******