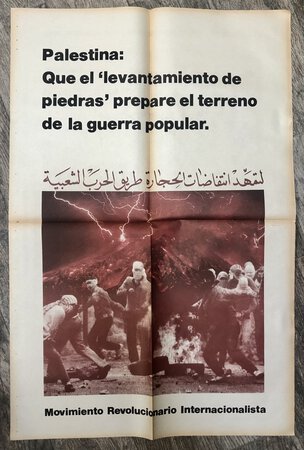 An international association of Maoist Marxist Leninist revolutionary parties, the Revolutionary Internationalist Movement (circa 1984-2007) was a steadfast supporter of the Palestinian Intifada resistance movement in the West Bank and Gaza.

In Arabic and Spanish. Quite scarce, I have only seen an on-line version collected in The Palestine Poster Project Archives, an English and a French/Turkish edition of this poster were also printed.

(Palestine: Let the 'uprising of stones'

pave the way for the people's war.