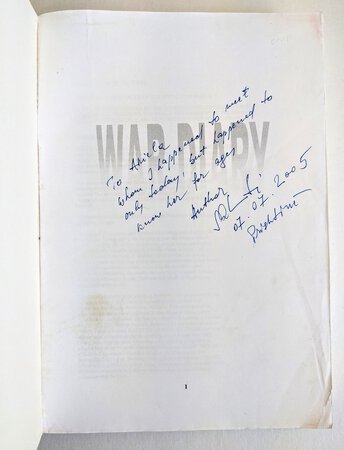 An unusual item titled WAR DIARY. Appears self-published. Bound in plain white wrappers. 318 pages printed on one side only. A week-by-week, day-by-day account of the atrocities being committed in the war in Kosovo. Reads incredibly like what is happening in Ukraine.

"13 September 1998: Serb troops with 37 tanks and tens of lorries and other vehicles left for Dushkaje region of Giakove. Thousands of Albanians are living in the open in the region. They all fear of a Serb massacre."

"16 January 1999: Serb forces killed and massacred between 60 to 80 Albanians in the village of Recak village of Shtimje. Bodies of the majority of victims are slain. There are killed and butchered people of different ages starting from a 6 weeks baby to a 90 year old man. Among the victims are women, children and old people...some of the victims have eyes taken out..."

"9 March 1999: The 1,500 people of Ivaje village of Hani i elezit are under siege. The situation is dramatic, where not only residents, but the Refuting people from the attacked village are not able to reach out to safety while the Serb tanks and troops are pounding the village and closing in on it. OSCE KVM is called for help to step in and save the population, most of them women and children, as well as elderly. Serb forces have already torched and destroyed 100 houses of the village."

The book is SIGNED, INSCRIBED and DATED by the author on the title page: "To Ariela / Whom I happened to meet only today, but happened to know her for ages / Author / (Sefer Jashari / 07.07.2005 / Prishtine [Kosovo]".

GOOD condition, creases, some light stains, and some soiling to the covers, title page has a tear to its bottom corner, inner pages remain bright, clean, clear and unmarked.

Horrific, specific accounts of atrocities in Kosovo in 1998 and 1999. I've never seen any work like it relating to the Kosovo War and its affect on the Albanians.

INTERNATIONAL BUYERS PLEASE NOTE: This book is heavy and will require additional shipping charges. After placing your order you will be notified of the additional charges and be able to accept or reject them before your payment is processed. Or you can contact us ahead of time to find out the shipping charge to your country. Thanks.