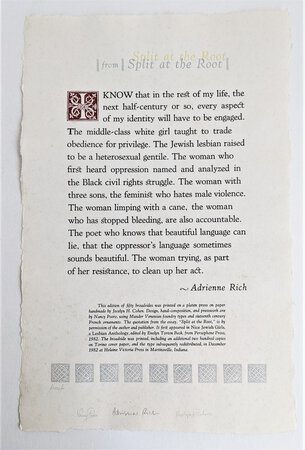 SPLIT AT THE ROOT, a BROADSIDE by ADRIENNE RICH; on HANDMADE PAPER by JOCELYN H. COHEN, with DESIGN, HAND-COMPOSITION, and PRESSWORK by NANCY POORE.

SIGNED at the bottom of the broadside by the Poet ADRIENNE RICH, and by both of the co-owners of the Helaine Victoria Press, JOCELYN H. COHEN and NANCY POORE. This is a Proof Copy, with "PROOF COPY" hand written just below the bottom left decoration.

Broadside, 10.5x16 inches, handmade paper, printed on one side only.

Published by the Helaine Victoria Press in Martinsville, Indiana. Limited to only 50 copies, this being a Proof Copy.

From the Colophon: "This edition of fifty broadsides was printed on a platen press on paper handmade by Jocelyn H. Cohen. Design, hand-composition, and presswork are by Nancy Poore...The broadside was printed, including an additional two hundred copies on Torino cover paper, and the type subsequently redistributed, in December 1982 at Helaine Victoria Press in Martinsville, Indiana.

Helaine Victoria Press, was a feminist press focused on women's history. It was co-founded in 1973 by Jocelyn Helaine Cohen and Nancy Victoria Taylor Poore. It is most remembered for its series of women's history postcards, but it also published some broadsides by noted feminist authors. The press ceased publishing in 1990.

Here is the text of the broadside:

******I know that in the rest of my life, the next half century or so, every aspect of my identity will have to be engaged. The middle-class white girl taught to trade obedience for privilege. The Jewish lesbian raised to be a heterosexual gentile. The woman who first heard oppression named and analyzed in the Black Civil Rights struggle. The woman with three sons, the feminist who hates male violence. The woman limping with a cane, the woman who has stopped bleeding are also accountable. The poet who knows that beautiful language can lie, that the oppressor's language sometimes sounds beautiful. The woman trying, as part of her resistance, to clean up her act.******