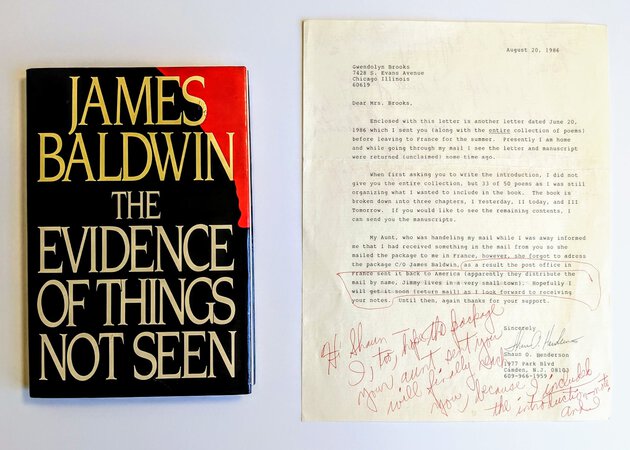 GWENDOLYN BROOKS HANDWRITTEN LETTER written on both sides of a typed letter which had been sent to her in 1986 by Shaun O. Henderson, a young Black poet who in 1985-1986 was a close friend and reported lover of James Baldwin, regarding an INTRODUCTION she wrote for a book of poetry he expected to publish. He never received the notes for the Introduction, and was writing in the hope that he would get them soon. He also thanked Brooks for her support.

The typed letter from Shaun Henderson TO Gwendolyn Brooks is dated August 20, 1986.

Gwendolyn Brooks wrote her response on the front and back of the typed letter. It reads:

"Hi Shaun / I, too, hope the package your aunt sent you will finally reach you, because I included the introduction note and can't find a copy of it around here. / I do hope it will finally reach you. I assumed your book was on its way to publication, introductory note and all. / Well, summer's over and I'm now ready to resume the road // Gwen Brooks".

The 8.5x11 inch letter was laid into a first edition copy of The Evidence of Things Not Seen, by James Baldwin, the book Baldwin was working on when Shaun Henderson lived with him.

Condition: The letter is in VERY GOOD condition, a few horizontal folds from when it was mailed and re-mailed, otherwise bright and clear. The James Baldwin book is in NEAR FINE condition, in a VERY GOOD dustjacket that has some shelf rubs and light signs of handling.

About SEAN O. HENDERSON and his relationship with JAMES BALDWIN and GWENDOLYN BROOKS (it took a lot of internet searching, but here are a few things I found):

An interesting group of letters, written by JAMES BALDWIN as he was finishing up his book, The Evidence Of Things Not Seen...we get an idea of the pressure that Baldwin felt he was under to finish the book, as well as the FEELINGS HE HAD FOR HIS FRIEND SHAUN HENDERSON. Baldwin thanks Henderson for a poem, and refers to one he wrote, and adds: "WE WILL HAVE MUCH TO TALK ABOUT. TO LEARN FROM EACH OTHER - FOREVER. MY LOVE NOW, KEEP IT THAT WAY - AMEN, KEEP THE FAITH, LOVE, JIMMY BALDWIN." *****************

***************** The second issue of Whirlwind Magazine, published in 2014, was dedicated to James Baldwin. The last article in the issue is by Shaun O. Henderson titled: Remembering Jimmy: On the Road with James Baldwin - Diary Entries 1985-1986. In one entry, dated 2/23/86, Shaun writes: "This week I met James Baldwin at the Afro-American Museum with Gwendolyn Brooks. She was the sweetest lady I ever met...Her poetry was beautiful. After the reading we had dinner at the director of the museum's home. We drank and talked until 4 a.m. It was a great and rare occasion to see the two of them together in such an informal manner. I can't believe this is happening to me. Meeting and becoming friends with Baldwin, wow! Meeting Mrs. Brooks, wow! She asked me to write her. I will definitely send her my poetry. Baldwin and I stayed up until 7:30 am talking, and then we went to breakfast." *****************

***************** ON A SAD NOTE: Shaun O. Henderson never published a book. The last I saw of him was on a short Internet video, a Black woman had posted interviews she did with some of the homeless in her town. One of the interviews was with the poet Shan Henderson who was living in a tent infested with rats. He recited a poem for her from memory. *****************

What might have happened if Gwendolyn Brooks' Introduction had found its way to Shaun Henderson, or if James Baldwin with his "forever my love" had helped his love get established, or if...