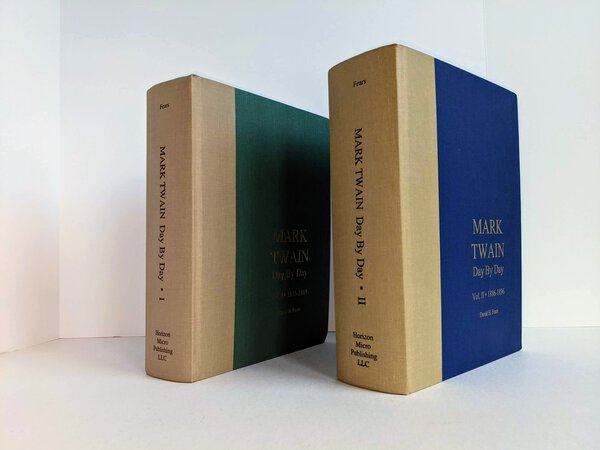 Each Volume is SIGNED and INSCRIBED on a blank prelim by the AUTHOR to HAL HOLBROOK, as follows:

Two volumes of four volumes, the final two being published in later years.

This work is considered to be the most comprehensive chronological examination of the life of Mark Twain (Samuel Langhorne Clemens). It is incredible in its minutiae, and the research is exhaustive.

Published by Horizon Micro Publishing, LLC, Banks, Oregon. Volume I is a second printing, published in 2009; Volume II is a first printing, also published in 2009. Both volumes were printed in a very limited number, and each volume has a small handwritten number in the upper corner of the rear pastdown. Vol. I is #103, and Vol. II is #75. The publisher is actually a dba of the author.

I spoke to the author, David Frears, in May 2022. He was 79 and had recently undergone 5-way heart bypass surgery. He sounded good. I asked him about the volumes which he signed to Hal Holbrook. He said he presented these two volumes to Holbrook personally, and subsequently he and Holbrook corresponded for awhile. He treasured the handwritten letters he received from Holbrook. Fears said that in 2009 when he presented these two volumes to Hal Holbrook they were the only two he had written, that's why there are only two. He was working on Volume III at the time and wasn't even aware he would write a Volume IV. Frears also told me that the volumes were printed in a very limited number, about 100-125 copies each, and that he numbered them. He added that most of the volumes were sold before they were printed, primarily to Universities and Twain scholars. He said he didn't print many copies because he didn't want to end up with extras of these heavy books, that he was too old for that. He said I was very lucky to have the Holbrook copies.

CONDITION: Both volumes are in VERY GOOD condition, the cover corners are lightly bumped, there is some soiling to the page edges (page edges of the closed book), and there are light signs of handling and use; overall the volumes are tight, bright, clean, clear and unmarked. Solid, nice, very presentable copies.

RARE, especially with the presentation to HAL HOLBROOK

About HAL HOLBROOK (from Wikipedia):

******Harold Rowe Holbrook Jr., b.1925 d.2021, was an American actor, television director, and screenwriter. He first received critical acclaim in 1954 for a one man stage show he developed, Mark Twain Tonight!, performing as Mark Twain. He won the Tony Award for "Best Actor in a Play" in 1966 for his portrayal of Twain. He would continue to perform his signature role for over 60 years, only retiring the show in 2017 due to his failing health. Throughout his career, he also won five Primetime Emmy Awards for his work on television and was nominated for an Academy Award for his work in film. It is estimated that there were over 2,100 performances of Mark Twain Tonight! Holbrook portrayed Mark Twain for longer than Samuel Clemens did.******