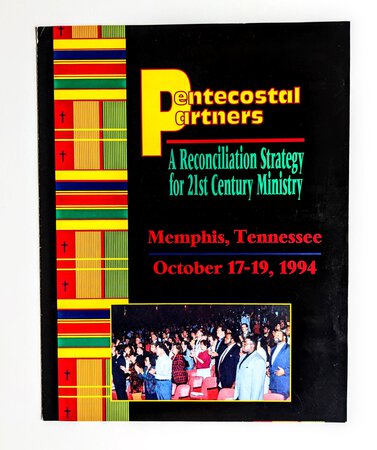 Two rare pieces of ephemera related to the MEMPHIS MIRACLE, a conference where the WHITE PENTECOSTAL CHURCH asked AFRICAN-AMERICANS for Forgiveness, and set a path towards interacial reconciliation.

A two-fold, six-panel (three on front, three on rear), 8.5x11 inch, announcement for the conference.

From the announcement: "October 17-19, 1994, will be 'red letter' days in the history of the Pentecostal Movement in America...The primary focus will be reconciliation of the African-American and Euro-American branches of the Movement...There is powerful evidence that God is answering the prayer of His Son, Jesus Christ, that His people may be one. A reconciliation dialogue will be open to the 200 participating leaders and pastors from both branches of the Movement and 1000 invited observers."

This important meeting became known as THE MEMPHIS MIRACLE.

A two-fold, six-panel (three on front, three on rear), 8.5x11 inch, announcement for the conference.

From the announcement: "Memphis was the site for the 1994 conference, as God shook the world with the MEMPHIS MIRACLE..."

CONDITION: Both items are in VERY GOOD condition, just some signs handling and use, still solid, bright, clean, clear and unmarked.

About the MEMPHIS MIRACLE (from Wikipedia):

******The Memphis Miracle was a 1994 meeting in Memphis, Tennessee, where representatives of Pentecostal and Charismatic denominations and churches came together to form the Pentecostal/Charismatic Churches of North America (PCCNA), an interdenominational and racially inclusive partnership. The PCCNA was created to replace the Pentecostal Fellowship of North America (PFNA) which was formed in 1948 by White Pentecostal Churches, but excluded Black Pentecostal groups. The PCCNA was created to remedy the situation, and it was at the Memphis meeting that the PFNA and its members apologized to the Black Pentecostal bodies.******