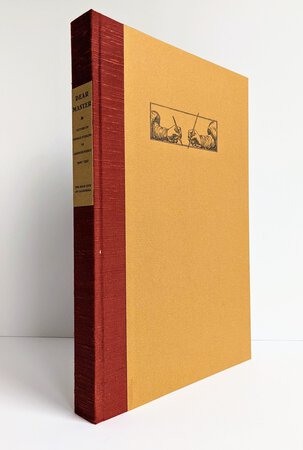 Published by the Book Club of California, San Francisco, 2002. Limited to only 350 copies, as stated on the Colophon page (the last page).

NEAR FINE book, sharp, tight, bright, clean and unmarked; in a NEAR FINE slipcase that has a couple superficial scratches. A lovely copy.

******George Sterling, b.1869 d.1926, was an American writer based in the San Francisco, California Bay Area and Carmel-by-the-Sea. He was considered a prominent poet and playwright and proponent of Bohemianism during the first quarter of the twentieth century. His work was admired by writers as diverse as Jack London, Upton Sinclair, Theodore Dreiser, and Sinclair Lewis.

In 1905 Sterling moved to Carmel-by-the-Sea, California, an undeveloped coastal area, and soon established a settlement for like-minded Bohemian writers. Carmel had been discovered by Charles Warren Stoddard and others, but Sterling made it world famous.

Sterling carried a vial of cyanide for many years. In November 1926, Sterling used it while at his residence at the San Francisco Bohemian Club. Kevin Starr wrote that "When George Sterling's corpse was discovered in his room at the Bohemian Club...the golden age of San Francisco's Bohemia had definitely come to a miserable end."******