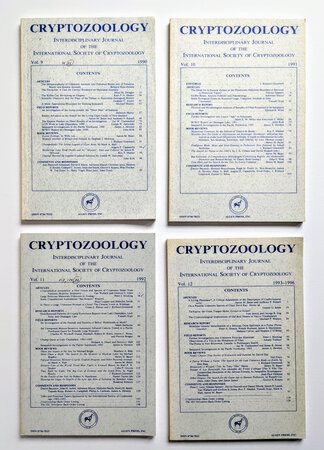 Four Issues of CRYPTOZOOLOGY - INTERDISCIPLINARY JOURNAL of the INTERNATIONAL SOCIETY OF CRYPTOZOOLOGISTS.

The International Society of Cryptozoologists investigated reports of UNKNOWN ANIMALS that may or may not exist, and into sightings of FABULOUS BEASTS including Sasquatch, the Loch Ness Monster, etc.

The issues are all in GOOD condition, some previous owners marks and notes here and there, otherwise tight, bright, clean and clear. Solid, nice copies.

Like Sasquatch and the Loch Ness Monster, original volumes of the Cryptozoology Journal are rarely seen. The cfz press reprinted volumes one to four in 2012-2016, but no further volumes of the Journal were reprinted. The volumes offered here have become nearly impossible to find.

About the INTERNATIONAL SOCIETY OF CRYPTOZOOLOGY (from Wikipedia):

******The International Society of Cryptozoology was an organization dedicated to the field of cryptozoology founded in 1982 in Washington, D.C. It ceased to exist in 1998.

It was founded to serve as a center for documenting and evaluating topics of interest to cryptozoologists. The study of such animals is known as cryptozoology, and Cryptozoology was also the title of its journal. The President was Bernard Heuvelmans, and the Vice-President Roy Mackal. Loren Coleman, John Willison Green, and several other prominent cryptozoologists were either Life Members, Honorary Members, or Board Members.

The official emblem of the society was the okapi, which was chosen because, although it was well known to the inhabitants of its region, it was unknown to the European scientific community until the English explorer Harry Johnston sent to London an okapi skin which received international attention in 1901.

The journal Cryptozoology was published from 1982 to 1996.

The ISC ended its activities in 1998 due to financial problems.

According to the journal Cryptozoology, the ISC served as a focal point for the investigation, analysis, publication, and discussion of all matters related to animals of unexpected form or size, or unexpected occurrence in time or space.******

INTERNATIONAL BUYERS PLEASE NOTE: These issues will require additional shipping charges. After placing your order you will be notified of the charges and be able to accept or reject them before payment is taken. Thanks!