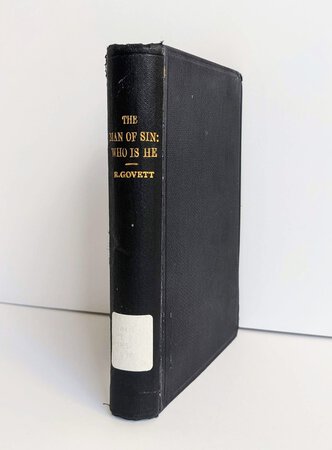 1866 Are the POPES the ANTICHRIST? An IRISH & a BRITISH Theologian Heatedly ARGUE thru CORRESPONDENCE - Association Copy

THE MAN OF SIN: IS HE THE POPES? Controversial Correspondence Between The Rev. EDWARD NANGLE, of SKREEN, IRELAND and ROBERT GOVETT of NORWICH, ENGLAND.

ROBERT GOVETT was a BRITISH THEOLOGIAN / EVANGELIST, connected to the CHURCH OF ENGLAND.

Their arguments for and against the POPE (and the POPES as a group concept) being THE MAN OF SIN / THE ANTICHRIST are contained in a series of correspondence between them.

From the Preface (by Robert Govett): "It is well known that the students of prophecy are at present divided into Preterists and Futurists. With the Preterists it is a point assumed as certain, that the Popes are the Man of Sin; and out of that assumption springs the year-day theory. And then the Book of Revelation is a history of the Christian Church; and the only question is, how far have we advanced in the fulfillment of the Trumpets and Vials. But if the Popes be not the Man of Sin, the whole structure falls. Then we are free to enquire, if any portion of the prophetic part of the Apocalypse be fulfilled. Then may we be looking out for the Lord's coming without any events preceding...I am sorry that the personal element appears so much in this discussion: but there are few who will state their arguments coolly, especially after the controversy has continued for some time..."

ASSOCIATION COPY. Copy of CHARLES MORSE WARD, b.1909 d.1996, a renowned American EVANGELICAL BROADCASTER and AUTHOR. His signature and address are written at the top of the front free endpaper. Charles M. Ward was named to the National Religious Broadcasters Hall of Fame in 1993.

Condition: EX-LIBRARY, deaccessioned from the Central Bible College Pearlman Memorial Library, with associated stamps and labels on the covers, endpapers, title page, and stamped on the page edges. Ex-library aside, the book is in GOOD condition, the covers are worn through at the corner tips, cracked a bit at the spine folds, and have some light spine end wear; internally, there is some offsetting and light foxing to the endpapers, the inner pages are lightly age toned, the title page has had its upper corner torn off, otherwise the pages are tight, bright, clean, clear and unmarked.

Irish and British arguing over religion? Who knew?

About ROBERT GOVETT (from Wikipedia):

******Robert Govett, b.1813 d.1901, was a British theologian and independent pastor of Surrey Chapel, Norwich, Norfolk, England. Govett wrote many books and brochures. His best known work is: The Apocalypse: Expounded by Scripture (1861-65), which he wrote under a pen name. Wilbur M. Smith said about it: One of the profoundest expositions of the book of Revelation that I know of is the work of Robert Govett. My own opinion is that he brings to his interpretation a more thorough knowledge of the Scriptures in their bearing on the last book of the Bible than any other writer of his generation.******

About EDWARD NANGLE (from Wikipedia):

******Edward Nangle, b.1799 d.1883, was a Church of Ireland minister and the founder of the Achill Mission Colony. He established a Protestant mission on Achill Island, County Mayo, in 1834 and worked there for eighteen years with the aim of bringing Protestantism to the Native Irish Christians who were impoverished in large part due to the colonial policies of the Protestant Ascendancy. Edward Nangle was involved in evangelical attempts to convert Catholics to Protestantism. He opened a Christian school on the island where children were taught reading, writing, agricultural skills and Christianity as part of a Missionary Colony.******