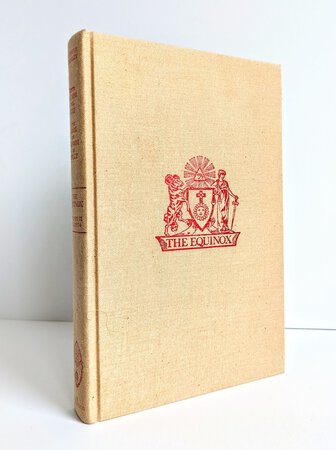 LIBER ALEPH vel CXI THE BOOK OF WISDOM OR FOLLY in the Form of an EPISTLE OF 666, the Great Wild Beast, to his Son 777. Being the Equinox, Volume III, Number VI. By the MASTER THERION (ALEISTER CROWLEY).

SIGNED and INSCRIBED by BILL BREEZE (HYMENAEUS BETA) to TONY (likely TONY IANNOTTI) on the half title page as follows: "For Tony, / With deep respect / & best wishes / Bill".

Tony Iannotti was an active member of the Ordo Templi Orientis and a friend of Bill Breeze, though the little I have researched about him leads me to believe that he and Breeze had a dust-up at some point, about Crowley, or the Caliphate, or some such matter. Don't know for sure, but it's out there in the Caliphatesphere for those who want to dig.

About WILLIAM BREEZE (from Wikipedia):

******William Breeze, also known by his neo-Gnostic bishop title of Tau Silenus (born August 12, 1955) is an American author and publisher on magick and philosophy. He is the Sovereign Patriarch, or supreme governing cleric, of Ecclesia Gnostica Catholica (E.G.C.), the liturgical arm of Ordo Templi Orientis (O.T.O.), of which he is the current Outer Head of the Order (OHO), also known as Frater Superior, as well as caliph, the order's international leader. In this capacity he is a leading editor of the occult works of Aleister Crowley, the founder of the philosophy and religion of Thelema, who is regarded as its prophet.

Under the name Hymenaeus Beta he is the second caliph to lead the traditional, orthodox, or "Caliphate" OTO...direct successor of Grady McMurtry (Hymenaeus Alpha), who was the first of the caliphs and second of the overall leaders, directly after Crowley's immediate successor Karl Germer, to follow after Crowley in his role as leader of the order. William Breeze has served as caliph from 1986 until the present.

Breeze was co-owner of the publishing company, 93 Publishing. In 1991 Breeze (93 Publishing) published an edition of Liber Aleph vel CXI: The Book of Wisdom or Folly, which was a reissue of the 1962 edition published by Thelema Publishing Co. Liber Aleph was written in New York City at the end of the First World War and is considered one of the most important commentaries on Crowley's teachings, conceptually written as if to Crowley's magical child, in the style of books fathers used to write for their children, with hereditary spirit of medieval grimoires. The text of Liber Aleph has been described by Crowley as an extended and elaborate commentary on The Book of the Law.******