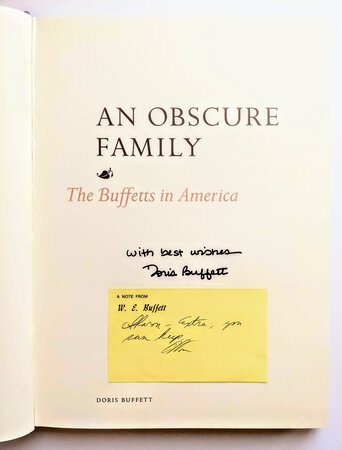 AN OBSCURE FAMILY : THE BUFFETTS IN AMERICA, by DORIS BUFFETT.

PRESENTATION COPY: SIGNED, INSCRIBED by WARREN BUFFETT to his CLOSE FRIEND and BRIDGE PARTNER (and bridge mentor), SHARON OSBERG, on one of his personal 3x5 inch yellow notepad sheets that is tipped-in on the title page. The notepad sheet is printed with "A NOTE FROM / W. E. BUFFETT".

The handwritten inscription by Warren Buffett reads: "Sharon - / Extra, you can keep / Warren".

The book is also SIGNED and INSCRIBED on the title page by the Author, DORIS BUFFETT, Warren's sister: "With best wishes / Doris Buffett".

Why did Warren Buffett present this Buffett genealogy to Sharon Osberg? As Osberg once said in an interview: "They've (the Buffetts) adopted me as a member of their family. I go there every Thanksgiving. We had his (Warren Buffet's) 75th birthday in Tiburon." (See the interview at the end of this listing.)

LIMITED EDITION of ONLY 500 COPIES.

From an estate sale held by Sharon Osberg when she moved from San Francisco to Tiburon, California.

******When Sequoia [a large Venture Capital firm] was seeking new independent directors 12 years ago, Mr. Buffett recommended Ms. Osberg. In a 2006 interview with The San Francisco Chronicle, she described Mr. Buffett as her best friend, and she has often spent Thanksgiving with him in Omaha. A former Wells Fargo executive, Ms. Osberg is perhaps best known as a world-class bridge player. She has won two world championships, and she and Mr. Buffett play bridge electronically four times a week.******

From the S.F. Chronicle, 2006 (a long but wonderful interview with Sharon Osberg):

Through bridge, 15 years ago at the Empire State Building. I was with Wells Fargo. He said, "The next time you're traveling east, stop in Omaha and we'll play bridge."

What did you say?

How did it go?

I was scared to death to meet him. I couldn't breathe for days. I stayed in a hotel and he gave me a thrilling driving tour of Omaha, in an old Lincoln.

How did you hit it off?

Warren Buffet is my best friend. We talk every day.

Has he been to your house?

Many times. His wife, although they were separated for 35 years, lived in San Francisco. During her illness, Warren came every week. I'd pick him up at the airport. He'd come here and watch football.

Did he give you any investment advice?

No. They've adopted me as a member of their family. I go there every Thanksgiving. We had his 75th birthday in Tiburon.

Are you as friendly with Gates?

Bill and Warren are similar. They don't much care what they eat.

About the BOOK (from the front dustjacket flap:

******An Obscure Family: The Buffetts in America is the culmination of Doris Buffett's ambitious project to trace her lineage, a project she began in 1983).******