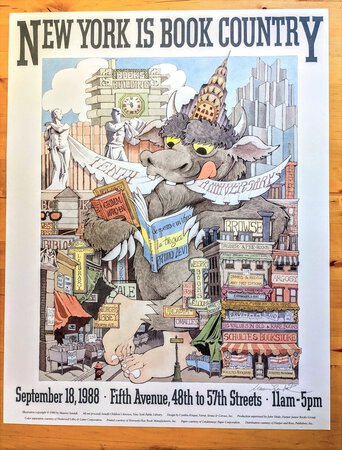 Poster,18.5x24 inches, signed by Sendak in the lower right corner.

One of Sendak's Wild Things monsters is reading a book while holding lots of other books in his arms and gripping a "Tenth Anniversary" banner in his teeth. The Empire State Building and other skyscrapers are in the background of the upper half of the poster, and a cluster of New York bookstores, a la 1988, are crammed into every conceivable space of the lower half of the poster. Many of those stores have signs with the store's name. The bookstores include: Dauber & Pine Books, Weiser's Books, James & Melville First Editions, Argosy Book Shop, Schulte's Bookstore, Arcadia Books, Greg's Circulating Library, and others. There is a street sign at the bottom center of the poster that reads "Fourth Ave", a street that was famous for its bookstores. Sadly, most of those stores have either shuttered or vanished into cyberspace. No more wandering through the literary wonders of New York's "Bookseller's Row".

NEAR FINE condition, a couple very slight signs of handling to the edges. Simply Lovely. Would look great mounted and/or framed.

Ah, New York City back when it really was book country!

Will be shipped carefully rolled in a sturdy mailing tube.