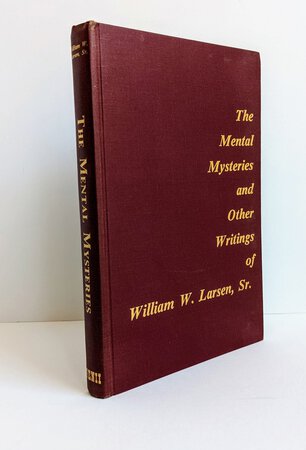 THE MENTAL MYSTERIES AND OTHER WRITINGS OF WILLIAM W LARSEN, SR. By William W. Larsen, Jr.

Published by The Genii Publishing Co., 1977. First Edition, as stated on the title page.

VERY GOOD condition, slight rubbing to the spine ends, a bit of ink staining to the top and front edge of some pages here and there, otherwise tight, bright, clean and clear. A solid, nice, very presentable copy.

******William W. Larsen Sr. was a Criminal Attorney from Pasadena California. But he was also an avid magician and gave up law to pursue his passion. He founded Genii, the Conjurer's Magazine. He bought the Thayer Magic Company and operated the Thayer Studio of Magic in Los Angeles. He founded the Academy of Magic Arts and Sciences. Bill Larsen Sr. died at the early age of only 48 in 1955.******

About the author Bill Larsen (from Wikipedia):

******William Larsen Jr., b.1928 d.1993, was co-founder and president of the Academy of Magical Arts, better known as Hollywood's Magic Castle, with his brother Milt Larsen and wife Irene Larsen. Larsen began his career in television at CBS, working his way up to associate producer of "Playhouse 90" and the Danny Kaye and Jonathan Winters variety shows. In 1953, after the death of his father, attorney and magician William W. Larsen Sr., he became editor and eventually publisher of Genii, The Conjurors Magazine, a publication for magicians founded by his parents in 1936. Larsen and his brother, Milt Larsen, realizing a dream of their father's, founded the Magic Castle in 1963, a private dining and performance club for magicians that now has more than 5,000 members. Bill Larson, along with his brother Milt, has a star on the Hollywood Walk of Fame.******