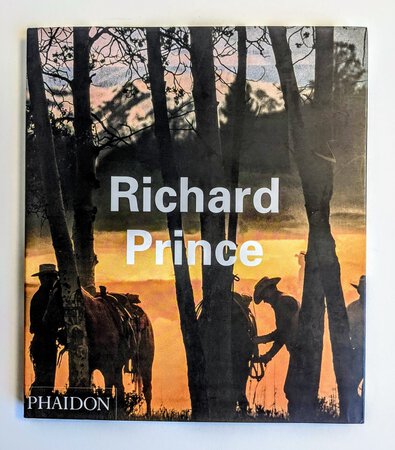 SIGNED by RICHARD PRINCE on the title page.

Published by Phaidon Press, London, 2003. First edition, with the statement "First published 2003" on the copyright page with no indication of additional printings.

Condition: FINE book in a NEAR FINE dustjacket that has some superficial shelf rubs. A lovely copy that looks and feels unused.

About Richard Prince (from Wikipedia):

******Richard Prince, b.1949, is an American painter and photographer. His image, Untitled (Cowboy), a rephotographing of a photograph by Sam Abell and appropriated from a cigarette advertisement, was the first rephotograph to be sold for more than $1 million at auction at Christie's New York in 2005. He is regarded as "one of the most revered artists of his generation" according to the New York Times.

Starting in 1977, Prince photographed four photographs which previously appeared in the New York Times. This process of rephotographing continued into 1983, when his work Spiritual America featured Garry Gross's photo of Brooke Shields at the age of ten, standing in a bathtub, as an allusion to precocious sexuality and to the Alfred Stieglitz photograph by the same name. His Jokes series (beginning 1986) concerns the sexual fantasies and sexual frustrations of white, middle-class America, using stand-up comedy and burlesque humor.

After living in New York City for 25 years, Prince moved to upstate New York. His mini museum, Second House, purchased by the Guggenheim Museum, was struck by lightning and burned down shortly after the museum purchased the House (which Prince had created for himself), having only stood for six years, from 2001 to 2007. In June 2021, the painting Runaway Nurse from 2005-06 fetched a record breaking $12,121,000 USD at Sotheby's in Hong Kong. Prince now lives and works in New York City.******

INTERNATIONAL BUYERS PLEASE NOTE: This book will require additional shipping charges. After placing your order you will be notified of the charges and be able to accept or reject them before payment is taken. Thanks!