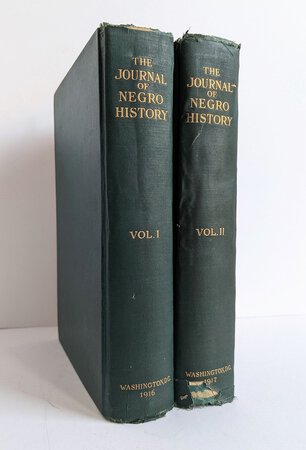 THE JOURNAL OF NEGRO HISTORY Volume I and Volume II. By CARTER G. WOODSON.

Each copy is SIGNED, INSCRIBED and DATED by the author, CARTER G. WOODSON, as follows:

Published by The Association for the Study of Negro Life and History, Lancaster, PA, and Washington DC, 1916 and 1917. First editions.

GOOD MINUS condition: There is chipping to the spine ends, the cover corner tips are worn through, there is a 1 inch split at the bottom edge of the front cover of Volume I, and the covers have some signs of handling. Internally, there is white cloth tape reinforcement / repair to the front and rear inner hinges and to the hinges of some of the prelim and latter pages of each volume; the inner hinge is cracked at a few places but holding; all the pages are lightly age toned, otherwise the inner pages are tight, bright, clean, clear and unmarked.

HISTORIC and IMPORTANT African-Americana. SIGNED and INSCRIBED by CARTER G. WOODSON to his 1918 colleague at M Street / Dunbar High School MARY E. CROMWELL, the noted Black activist and mathematician, these two volumes are not only rare but unique..

About CARTER G. WOODSON (from Wikipedia):

******Carter Godwin Woodson, b.1875 d.1950, was an American historian, author, journalist, and the founder of the Association for the Study of African American Life and History. He was one of the first scholars to study the history of the African diaspora, including African-American history. A founder of The Journal of Negro History in 1916, Woodson has been called the FATHER OF BLACK HISTORY. In February 1926 he launched the celebration of Negro History Week, now known as the Black History Month.

school. One of his colleagues was the mathematics teacher, Mary E. Cromwell. In 1912 Woodson was the second African American, after W. E. B. Du Bois, to obtain a PhD degree from Harvard University. But he continued for years teaching at M STREET HIGH SCHOOL until, in 1919, he joined the Howard University faculty.

Woodson worked to preserve the history of African Americans. He noted that African-American contributions were overlooked, ignored, and even suppressed by the writers of history.******

Read much more about Carter G. Woodson on his Wikipedia Page, in the article: THE BURGEONING 'CAUSE,' 1920-1930 AN ESSAY ON CARTER G. WOODSON (found when searched under that title), and elsewhere on the Internet.

About MARY E. CROMWELL, to whom the books are inscribed:

******Mary E. Cromwell earned her A.B. degree from the University of Michigan and her M.A. degree from the University of Pennsylvania and did additional graduate work at Columbia University. She taught mathematics at M STREET HIGH SCHOOL / DUNBAR HIGH SCHOOL, an elite public High School for African-Americans in Washington, D.C. Miss Cromwell was keenly interested in social problems, especially as they concerned African American women. She was a founder of the National Association of University Women, and served as its first Secretary.

MARY E. CROMWELL and CARTER G. WOODSON both taught at M Street / Dunbar High School in 1918, the year in which these books were inscribed by Woodson to Miss. M. E. Cromwell.******