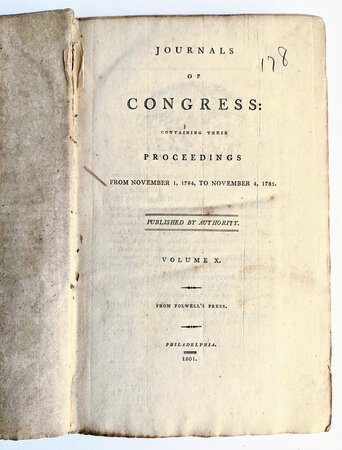 JOURNALS OF CONGRESS: Containing Their Proceedings from November 1, 1784, to November 4, 1785. VOLUME X.

Published by FOLWELL'S PRESS "Under Authority of the U.S. Senate and House of Representatives", Philadelphia, 1801. FIRST EDITION - LIMITED to 400 COPIES.

Condition: The plain card covers have some soiling, scattered stains, and signs of handling and wear, but are still doing their job well. Internally, the pages are toned and there is some foxing throughout, the latter pages have light shorelining to their upper margin area (printing is always fully legible); there is an old (circa 1870) Lombard University library bookplate on the front pastedown (Lombard University was founded in 1853, changed its name to Lombard College circa 1890, and finally shuttered in 1930); the front and rear inner hinges are cracked but holding well, the front free-endpaper is separating at its top 2 inches; there is edge wear including small closed edge tears and chips, folded corners, and a couple folded pages here and there; one page has a small whole; there is a previous owner's signature and date on the front free-endpaper (?? / Dec 9th, 1828), the number 178 written on the title page (copy 178?), and an early previous owner's signature at the top of the first page of text (B. Stephenson?). A complete and original copy..

The professionally made clamshell box has a small coffee stain to its top edge, otherwise solid and lovely.

A RARE 1801 First Edition of one of the original 400 copies authorized by Congress and printed by Folwell's Press, in a handsome clamshell case.